The McNAIR Aerospace Center is made possible by the leadership and vision of our supporters. We thank you all.

Women with a Vision

During a dinner to celebrate the opening of McNair, Anita Zucker said her gift is an example of Tikkun olam, a Hebrew phrase that means "repairing the world" or "healing the world." The McNAIR Center achieves this through providing opportunities for education that will transform South Carolina into a more prosperous state.

I believe he would have been so very honored. It’s touching because this is what he always wanted to do — to influence others, especially those in his own state.

The McNAIR Aerospace Center launched in 2011 based on a pledge of $5 million by University of South Carolina alumna and benefactor, Darla Moore, '75 business. Moore made the donation in memory of her fellow Lake City, S.C., native Ronald E. McNair.

In 2012, USC announced a second $5 million pledge to the center dedicated to create the Zucker Institute for Aerospace Innovation within the McNAIR Center. As a former elementary school teacher, she knows the importance of an educated world. Zucker is chairwoman and CEO of The InterTech Group which employees 15,000 people and produces devices used in aerospace, aviation and power generation, as well as other products and services.

A Florence S.C. native and USC graduate, Marva Smalls is an executive vice president at Viacom and Nickelodeon. She donated $1 million to endow scholarships for minority students from the state's Pee Dee region majoring in computer science and engineering. 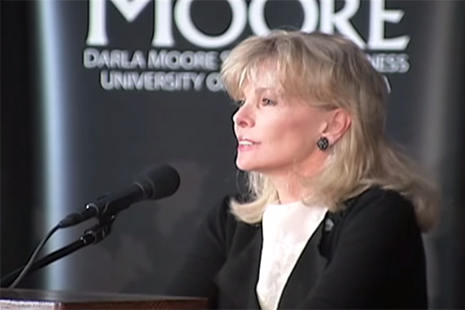 The future of South Carolina

Darla Moore announcement on March 24th, 2011 her gift of $5 million in honor of one of her heroes, Ronald E. McNair.