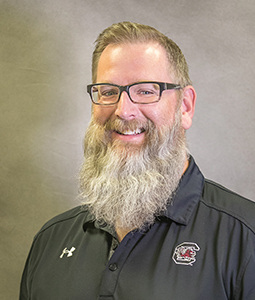 Randy was born and raised outside Utica, a small city in Upstate New York. After receiving an associate's degree in Broadcasting from Herkimer County Community College, Randy obtained a Bachelor of Media Arts from the University of South Carolina. Upon graduation, Randy worked for ACS Sound and Lighting in West Columbia doing productions for various events in the Southeast. He then took a logistics specialist position at Ikon Office Solutions where he got his first taste of information technology. From there he began to pursue website design and development. He then took his experience in broadcasting and the web to WACH FOX 57, the Columbia FOX affiliate. At WACH, he launched the first WACH.com, edited movies and was a member of the news team's production staff. With the growing need for virtual services, Randy became University Housing's first Web Manager in 2004 and then transitioned into the Interactive Media Manager in charge of all audio, video and interactive media production in 2012.