The University of South Carolina faculty has — for the third year in a row — set a new record for sponsored award funding, garnering $253.6 million for research, training and service in fiscal year 2017 (July 1, 2016 through June 30, 2017).

USC Vice President for Research, Prakash Nagarkatti, lauded this major achievement by recognizing the outstanding faculty members who have made it possible. “USC could not continue breaking funding records year after year without our faculty, which is made up of some of the brightest minds in academia today,” he said. “They are the engine that keeps our research enterprise moving, accelerating us toward an ever brighter future. I also want to recognize the outstanding research support staff in the Office of Sponsored Awards Management, the Office of Research and Grant Development, the many academic departments and other administrative units, who ensure sponsored awards are administered so well.”

USC President Harris Pastides joined in the celebration, saying, “Just when I thought I could not be more proud of USC’s faculty accomplishments, a major new milestone like this one comes along and shows me that the sky is the limit. I commend our faculty for setting this funding record for the third year running — a truly impressive achievement.”

See the past year’s funding trends in our FY2017 annual funding charts [pdf].

USC could not continue breaking funding records year after year without our faculty, which is made up of some of the brightest minds in academia today.

Several large awards of note contributed to the new record this year. Here are just a few noteworthy examples:

Since 2011, the Office of the Vice President for Research has implemented a variety of strategic funding efforts that have contributed to USC’s research and sponsored awards successes over the past several years.

“We have seen amazing returns on our investments in our internal faculty funding programs like ASPIRE and RISE, which encourage faculty throughout the USC system to embark on new interdisciplinary collaborations and novel lines of research that they might not have been able to pursue otherwise,” Dr. Nagarkatti explained. “This seed funding translates into enhanced competitiveness and increased success rates for faculty as they apply for extramural dollars to build on the foundations they have laid with internal investments.”

The numbers bear out the success of these efforts in dollars and publications: 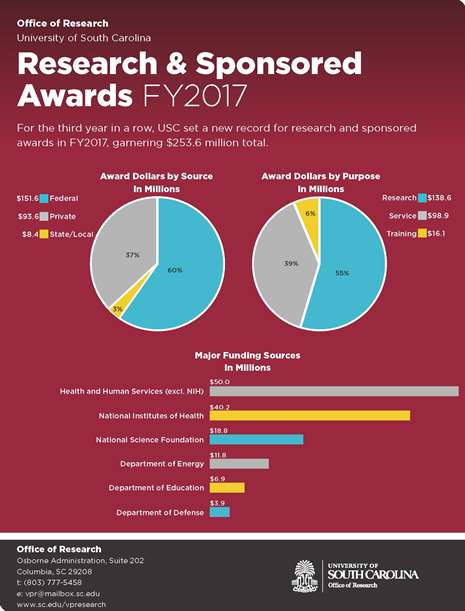 Zoom in on 2017 research and sponsored awards data.

Get the one-pager [pdf]