For the fourth year running, the University of South Carolina has set a new record for research activity and sponsored award funding, garnering $258.1 million in fiscal year 2018 (July 1, 2017 through June 30, 2018).

USC Vice President for Research Prakash Nagarkatti touted this achievement saying, “It’s always exciting to set a new record, but when it’s the fourth record-setting year in a row, that is an electrifying trend. Our outstanding faculty seem to be unstoppable when it comes to innovation, research, teaching and serving, and their excellence is evident in this impressive, consistent funding success. My office is so honored to support researchers at every level, to help them maximize their success in securing funding.”

Internal funding programs Nagarkatti instituted early in his tenure as Vice President for Research have for years been showing demonstrable results in increased sponsored awards funding of projects initially seeded by internal investments. ASPIRE—a program devised to support new lines of research, interdisciplinary projects and shared infrastructure investments—has seen a return of $174.4 million on the $13.9 million of internal dollars invested since 2012. RISE provides grants of up to $6,000 to $8,000 for faculty working at USC System campuses to complete research and scholarly projects during the summer months. Through such programs and strong institutional support from the leadership, USC’s system campuses have seen significant growth in research activity and sponsored awards during the past five years (FY2014 to FY2018):

USC President Harris Pastides joined Nagarkatti in celebrating the FY2018 funding success story: “I could not be more proud of our exceptional faculty and the hard work they put in to secure funding dollars necessary to help our university generate innovation, research, scholarship and opportunities for our students at a world-class level. Our record of consistent funding growth is just more proof that our people are among the best and brightest in their fields.”

These externally sourced dollars support research, service and training efforts across the USC System, and reflect funding growth in each of those three categories, with research dollars up $1 million over FY2017, service funds increased by nearly $3 million and growth in training dollars totaling  $600,000. Fiscal year 2018 also saw increases across two of the three broad categories of funding sources (federal, state/local and private). Federal agencies, widely recognized as the most competitive funding source awarded USC about $1 million more in FY2018 than the previous fiscal year, for a total of $152.5 million.

It’s always exciting to set a new record, but when it’s the fourth record-setting year in a row, that is an electrifying trend.

Contributing to this year’s record funding level were 28 new awards of $1 million or more, an increase of one third over FY2017. Here are a few noteworthy and impactful projects on this distinguished list: 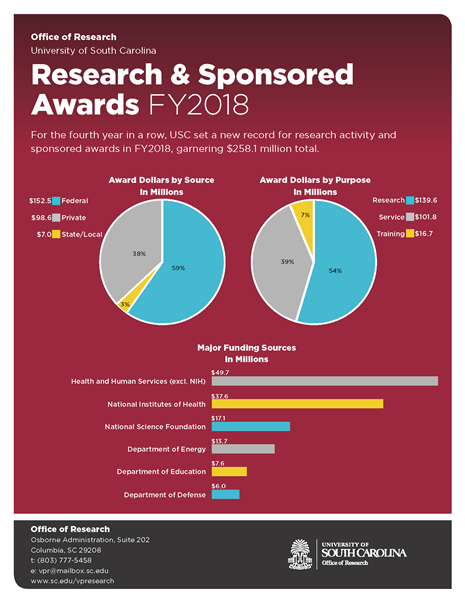 Learn more about USC’s fiscal year 2018 funding by drilling down into sources and purposes of the $258.1 million garnered in the past year.

Get the one-pager [pdf]