Comics in the classroom

Bringing Native American history and art to life for students

“It was a great moment of synchronicity,” says Courtney Lewis, UofSC professor of Anthropology.

“I’d been wanting to teach a class about American Indian voices in pop culture for a long time, and I’d been waiting for years for the appropriate teaching materials to surface. When University Libraries acquired the Gary Lee Watson Comic Book Collection, I knew the time was right.”

The Watson Collection is one of the world’s largest collections of its type, with more than 180,000 comics, magazines, paperbacks and pulps. It includes items from all genres, publishers and eras. A lifelong comics fan and collector, Watson gifted the collection to the Libraries in 2019.

Lewis reached out to Michael Weisenburg, curator of the Watson Collection at the Libraries' Irvin Department of Rare Books and Special Collections. Weisenburg, along with other colleagues, had spent more than a year going through the massive collection. They were, and still are, going through all the boxes, processing comics, cataloging books, and discovering rare and unique items.

“We just kept touching base every month as he went through the comics and kept finding American Indian representations,” Lewis says. “And through our conversations, we discussed how I could teach a class using those comics as primary resources.”

She had assumed she would bring her spring 2021 class to the Hollings Library to work directly with Weisenburg and the comics materials. When the course moved online because of the COVID-19 pandemic, she had to get creative in getting resources to students.

“Comic books are not textbooks. They’re not readily available on Amazon. And because of copyright, you can’t copy and digitally disperse an entire comic book to your class,” Lewis says.

Weisenburg got busy scanning pages from comic books for Lewis’ class and put an instructive video together. Then he met with the online class early in the semester on Zoom to provide a comprehensive summary of American Indians in comics -- as characters, as authors and as artists.

While the bulk of the materials he showed portrayed Indian characters between the 1940s and 1970s, his talk was designed to provide contrast for the study of modern character portrayals and American Indians working in the comics industry.

Lewis’ students found their experience with Weisenburg set the stage perfectly for their studies.

“Getting this historical background from Dr. Weisenburg about comics and comics as an art form, and then reading the stories was amazing,” says Michael Ponessa, a senior pre-med and biology double major. “We were able to analyze components of those stories, like what the message was, how it was conveyed, and how intentional it may have been."

“By having these rare comic books digitally at our disposal, to be able to use them as part of our class and our research materials, it became a very real phenomenon that just doesn’t exist within normal classroom walls.”

Having comics in the classroom shed a whole new light on them for some students, including Sarah Hudoc-Jeffrey, a rising junior and journalism major with an anthropology and Spanish double minor.

“Having someone like Dr. Weisenburg come in and talk about comics in an academic, professional way really opened my eyes to the fact that yes, this is scholarly study, this is not just something children read,” says Hudoc-Jeffrey.

“I learned a lot about comics, and I’ve really fallen in love with them,” she says. “I’ve definitely been inspired to have comics be a part of my life, and this summer I’m going to start educating myself on how to get into the industry. I think it pairs well with journalism and anthropology. This class has been a great combination of that.”

Even though Lewis’ students couldn’t visit the library and comb through the collection themselves, the online class was a success.

“I’d planned to do a lot of this in person and take the students to the collection, but the Libraries went above and beyond to research these resources and make them available,” Lewis says. “This class would not have been the same without those resources.” 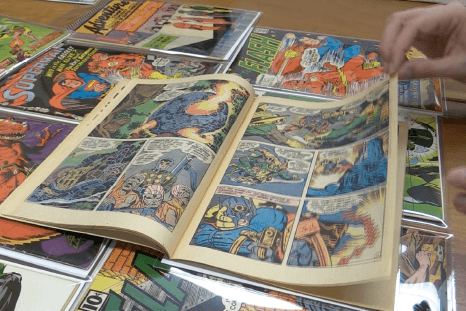 Learn more about the rare and unique comic books in our collection.