Learn more about the members of our team, or contact us for assistance.

Service History: Todd served in the Army for over 34 years retiring in the grade of Major General.  He completed his military career as the Chief of Staff, United States Africa Command in Stuttgart, Germany. Prior to his final military posting Todd served in an array of positions during a career that included seventeen moves and multiple deployments. Among his assignments, he has served in combat as both an infantry battalion and brigade commander; he was the US Army’s Director of Training; and he commanded an Army Training Division assisting US Army Reserve and US Army National Guard units attain and maintain readiness. He remains privileged to have led, served, and fought alongside the best men and women this Nation has to offer. 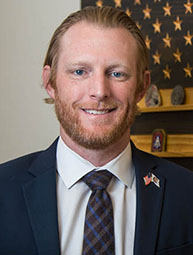 Service History: Served with 2D Recon Battalion and 2D Force Recon from 2005 to 2009, and deployed in support of Operation Iraqi Freedom from 2007 – 2008. Separated from Marine Corps in 2009 and enrolled at South Carolina as a student veteran.

Jared supports the university's innovative effort to support and attract military-affiliated students in the classroom and via distance learning. Along with being university advisor to the Student Veterans Association, he is a founding member and current university liaison for the My Carolina Veterans Alumni Council. Jared serves on the board of Palmetto State Base Camp, Stephen Siller Tunnel to Towers Foundation — SC 5K Walk/Run, 9/11 Remembrance Foundation of South Carolina and Fisher House Foundation — Columbia, S.C.

Service History: Chris’ dad was commissioned in the U.S. Army following his time in the Army ROTC program at Wofford College. His grandfather served during World War II as a crew chief on the Lockheed P-38 Lightning for the Army Air Corps.

Education/Major(s): BA in Religion with minors in business administration and philosophy from Presbyterian College, M.Ed. in Higher Education from South Carolina (2016)

Chris manages the Office of Veterans Services for the university. With 11 years in higher education and six years working with veterans, his office is responsible for the certification of VA educational benefits as well as military-affiliated student onboarding. Chris serves as chair for the Veterans Student Services Advisory Committee, which works to deliver student-centered, connected and sustainable services university-wide.

Student Veterans Association President
Service History: Scott has served as an Airborne Infantryman in the U.S. Army from 2006-13. He has spent 27 months in Afghanistan in Kamdesh and Logar Provinces where he was wounded in combat and received a Purple Heart. After his retirement, he continues to serve as an Army spouse based out of Shaw AFB, SC.

Education/Major: Pursuing a BS in Computer Science class of 2021. Scott maintains a 3.6 GPA has received 4 merit based scholarships.

Scott Serves as the President of the University of South Carolina’s Student Veterans Association focusing on student veteran engagement and fundraising for service related scholarships. He also works under the VA work study program as a Veterans Services Coordinator for Veteran and Military Services and as SVA President, serves on the Veteran Student Services Advisory Committee for the university.
Email: sjcraig@email.sc.edu