As a new budget year approaches, the University of South Carolina is renewing its call for additional public support of higher education. In the months ahead before the next legislative session begins, university officials will be working with elected leaders, education advocates, students, parents, employees, alumni and the business community to emphasize the critical role higher education plays in the economic and overall wellbeing of South Carolina and its citizens.

The $8 billion state budget for fiscal year 2017-18 continues more than a decade-long pattern of limited investment of state resources into higher education, leaving colleges and universities once again assessing how they will operate with few, if any, new state resources. This pattern has resulted in a continued shift from a state-supported system of higher education to one that is mostly dependent on tuition dollars and drives up costs for students and their families.

Despite the continued insufficient funding, however, University of South Carolina President Harris Pastides noted that school officials are encouraged by the progress made this year in the conversation about the state’s responsibility to invest in the future through higher education.

“Among business leaders and in the hallways of the Statehouse, we can see momentum beginning to shift back toward the interest of the student and we appreciate those who have been willing to lead,” Pastides said. “We will continue to fight for more support of and investment in higher education; and, we will continue to fight for the interests of South Carolina’s students — an educated and competitive population is the key to our state’s economic and overall wellbeing.”

“As Carolinians, we must continue to lobby our representatives to invest in our world class institution which is closely aligned with the future prosperity of our great state,” says Lordo. “Higher education must be a priority for our state if we are to continue to support and improve the communities in which we live.”

Learn more about how to get involved.

USC and its campuses are a major economic engine for the state. All told, they have an estimated $5.5 billion economic impact in South Carolina and contribute approximately $220 million in tax revenue back to the state every year. The university also set a new record in 2016 for competitive research funding, bringing in more than $250 million in sponsored awards.

USC Columbia is now the fourth fastest-growing flagship university in the country, and maintaining a pipeline of skilled graduates in high-demand fields is key to growing existing businesses, recruiting new industries and encouraging entrepreneurship in the Palmetto State.

As Carolinians, we must continue to lobby our representatives to invest in our world class institution which is closely aligned with the future prosperity of our great state. Higher education must be a priority for our state if we are to continue to support and improve the communities in which we live.

For the University of South Carolina, the 2017-18 state spending plan provides a 1.9 percent increase in its systemwide base budget, amounting to about $3 million. But those funds are offset by a mandate costing $3.3 million to help shore up the state’s pension system as well as an estimated $700,000 in increased health care costs.

That means USC will still receive less than 10 percent of its budget from state appropriations, and despite the nationwide economic recovery since the Great Recession, South Carolina lawmakers have chosen not to restore funding cut during the downturn. 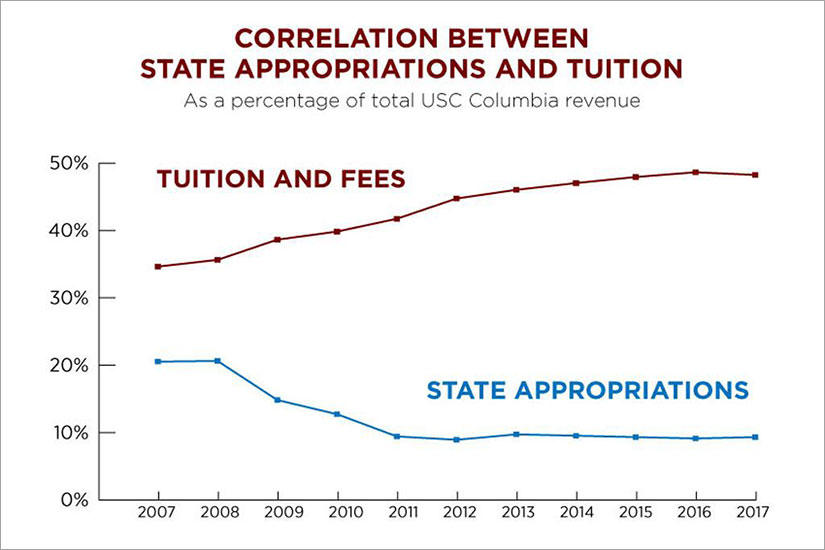 As a result, the USC Board of Trustees met on Friday, June 23 and voted to implement a modest increase to account for the lack of state funding. The following changes were approved for the 2017-18 academic year:

Next year’s tuition increases, and those in the previous six years, are still below the national average for tuition inflation.

“It’s an unfortunate reality that in the absence of additional state funding, tuition increases are one of the only tools available to cover rising costs and ensure USC continues to provide a world-class educational experience to its students,” says Board Chairman John C. von Lehe Jr. “The University has been and will continue to be a good steward of the funds invested in us by the state, students and donors. The University has consistently been named among the most efficient institutions of higher education in the country.”

Lordo also commented on the growing reliance on tuition to operate the university.

“Now, more than ever, the university will depend more on student-funding than state-funding,” says Lordo. “The flagship higher education institution for the State of South Carolina must rely on its students and their parents to fill the financial needs our state legislature has declined to fund. The difficult yet unavoidable decision for a modest tuition increase is necessary to maintain the world-class educational environment we, as students, experience at the University of South Carolina.” 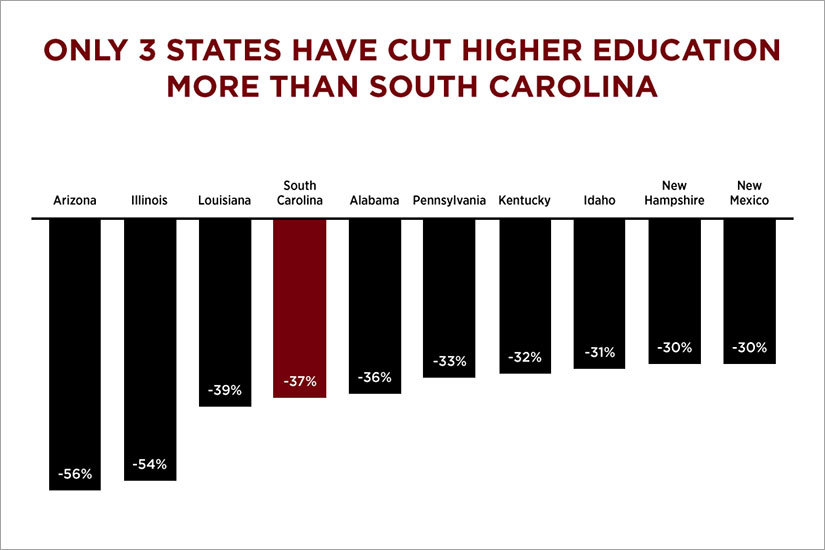 USC is moving ahead by making strategic investments of its own into areas that target improvements in teaching, research innovation and student support.

Last month, the Columbia campus announced that all colleges and service units will contribute 3 percent of their respective operating budgets to academic enhancements. The plan will reallocate approximately $17 million to support a range of important projects, including recruiting top faculty, reducing class sizes for high-demand courses and creating new experiential learning opportunities for students across academic disciplines, particularly those aligned with the economic needs of the state.

“We must make these kinds of strategic investments in order to serve our students and the address the future needs of the state,” says Provost Joan Gabel, who announced the reinvestment plan last month.