A 20-Year Journey to the Stage

In 1996 when now USC associate professor Marvin McAlllister was finishing his dissertation at Northwestern, he included an outline for the “Drama of King Shotaway.” He even presented it at a couple of conferences along the way, but never did anything more about the “play idea” because he got busy with life and career.

But, we are all about to see why McAllister was captivated by the story of King Shotaway, a chief of the Black Carib Indians on the island of St. Vincent. The debut of his story reading is set for tonight, March 1 at the Richland County Public Library.

Q. What captivated you about this story?

As theater manager and new playwright William Brown says in the play, there are plenty of native insurrectionary stories --  every island in the Caribbean has one. But I was drawn to the fact that Brown, manager of the first black theater in the early U-S, decided to write and produce an original drama about Afro-Indio natives on the island of St. Vincent, set in 1795, as opposed to a drama about black folks in 1820s New York. Brown actually took a broader perspective, more diasporic, more hemispheric. Over the years, various scholars have speculated on why Brown picked this particular subject, and my drama gets into that, plays with that.

Q. Interesting that Brown’s original drama did not exist as a text, so did you take creative license?

I playfully speculate on how his words might have made it onto pages. But the absence of a text attracted me to the story because there was such immense room for imaginative speculation, all kinds of space for recreating Brown’s original drama, based just on his advertisements. But along the way, there’s also all this room to play with so much history, to stage and explore the nineteenth-century conditions in Greenwich Village that produced this African American dramatic first.

Q. Who was King Shotaway?

Shotaway was a chief of the Black Carib Indians on the island of St. Vincent, also known as the Garifuna people, who would later relocate to Belize/British Honduras. This tribe was a unique fusion of natives of the island and escaped African slaves from other islands. The correct spelling of his name is Chatoyer, but in his publicity for the play’s premiere, William Brown advertised the chief/king as Shotaway. This primary chief had a brother named DuValle, a secondary chief, and the two of them were the rulers of St. Vincent until they made questionable treaties with some cunning British colonists.

Q. What is the story about?

On one track, the story is about a 1795 insurrection that Shotaway and DuValle launched to remove the Brits from their ancestral lands. On another track, the story is about an all-black company, in 1822 New York, rehearsing to stage this original drama. And if you know anything about black theater companies, past and present, in fact, theater companies of any kind, there is always internal “drama” that comes with this kind of new-work enterprise, as they break fresh ground and explore new roles onstage and beyond.

Q. Are there any subtle nuances to which the audience should pay attention?

I think the audience should come prepared to hear different languages, specifically Dutch, French, and a little Garifuna. Sometimes they will be able to catch the meaning from the context. The audience should come prepared to see actors playing multiple roles; it was a small company back in the early 1820s. In the text, the manager/dramatist Brown will try to set you up these changes in character in the insurrectionary narrative. So, watch for those. There are also physical actions that are essential to each scene, but because this is a reading, and not a true “seeing place,” those actions will only be described or read by the stage manager. So, an audience will need to come prepared to imagine those actions. Finally, as for subtlety, there might be something that sneaks up on audience members by the end of the drama, but I don’t want to give it away.

Q. How important was having a Provosts' Grant to put on this reading?

The Provost’s Grant was absolutely essential to putting together a week-long workshop, this past August, and then the first public reading which will happen on March 1. The vast majority of the money went into paying the actors, the director, the stage manager, and musical director who were essential to developing this new work. I didn’t draw any salary from the grant.

Serious new play development is very costly and therefore very rare in professional and academic theater. And none of the previous, fully produced plays have gone through this kind of intensive process. I have work-shopped other new dramas and musicals, as a dramaturg, and I have been sort of envious of that level of devotion and development.

But, this Provost Grant made it possible for me to do something similar with my own work.

The reading of the Drama of King Shotaway will take place at 6:30 p.m., Thursday, March 1 in the main auditorium of the Richland County Public Library. 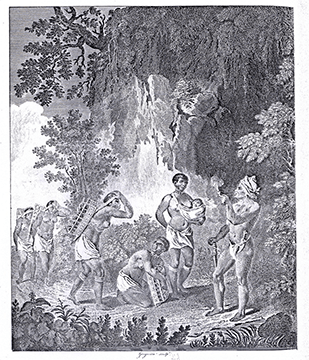 Marvin McAllister's play "The Drama of King Shotaway" tells a story of a chief of Black Carib Indians on the island of St. Vincent. The play will be read at Richland Library on March 1.