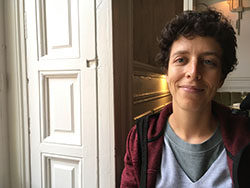 In 2022, Ana joined the University of South Carolina as Assistant Professor of Spanish Contemporary Literature and Culture. She is originally from Spain, where she completed a BA in Translation and Interpreting from the University of Granada. She then moved to the United States, where she worked as language and cultural ambassador in a public high school in Houston, TX for a year. Afterwards, she went to Portland State University, where she obtained a MA in Spanish. Lastly, at the University of Texas at Austin, she graduated from the Ph.D. program in Iberian and Latin American Literatures and Cultures.

Her scholarly research specializes in Contemporary Spanish Literary and Cultural Studies with a focus on Feminist, Gender, and Sexuality Studies. Methodologically, she uses theoretical frameworks from Literary, Film, and Cultural Studies, Gender Studies, Queer Studies, Media Studies, Sociology, and Anthropology. The book project she is working on explores an interdisciplinary archive of transfeminist cultural production in Spain that encompasses texts, short films, and performance. Her second research project addresses the theme of nostalgia in contemporary representations of rural Spain.

She is the author of two articles: “Cruising ‘Campos de Castilla’: prácticas queer del postporno transfeminista,” which appeared in the Journal of Gender and Sexuality Studies (2018), and “Pornoterrorism: Antisocial Dykes in the Spanish Transfeminist Movement,” which has been published in the journal Feminismo/s (2022).