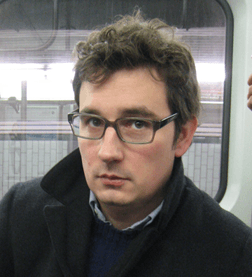 His research explores the intersections of literature, philosophy, and human sciences around 1800. Generally, he is interested in the formation of the modern individual as a site of scientific exploration. He has recently published articles on this theme, including: “Beyond the Brain: Skeptical and Satirical Reactions to Gall’s Organologie” (2010) and “Writing Empirical Souls: Self-Deception and the Science of Man around 1800” (2016).

He has completed a book manuscript, entitled The Disease of the Age: Skepticism in German Literature and Philosophy around 1800, which looks at the reemergence of skepticism in post-Kantian philosophy and Early German Romanticism and is currently under review. He has also published an article on these skeptical concerns: “Kant’s Uncertain Mariner” (2014) and “The Satirical Embodiment of German Idealism: Jean Paul and the Parasitic Poetics of Doubt” (under review).

He has recently taught a wide range of undergraduate courses, to include: “The Idea of Nature in German Thought,” “Confronting Fascism,” “German Conversation and Composition,” “In Pursuit of Freedom.”  And also teaches graduate seminars in both German and Comparative Literature, to include: "Enlightenment and its Counter-currents,” “Haunting the Real,” and “A Survey of German Culture.”