Spanish has become the second most common language in the United States. Outside of our country, you'll also find it spoken in 21 countries in Latin America, Spain, and parts of Africa, making it a useful language for anyone interested in travel or international business.

A major in Spanish will help you prepare for a wide variety of careers in education, politics, foreign service, the helping professions, travel and tourism, and communication. A minor in Spanish is also available. Spanish advising is always available.

Rewards undergraduate French and Spanish majors for academic achievement. Nominations to be made by UofSC faculty no later than March 1 the semester of graduation.

Frequency: Awards made once a year (March), depending on available funds.

Term of Award: a single semester.

Application, upon nomination, to include:

Awarded each year to one, two or three students majoring in foreign language who demonstrate:

Each candidate’s nomination dossier should include a vita, an up-to-date transcript, a personal statement of career intention, and two letters of recommendation from faculty familiar with the candidate’s work. The dossier needs to be submitted to the respective Program Director by March 1st.

Scholarship recipients will be announced by April 15 of each year. The scholarships are awarded as tuition remission for the following fall semester at UofSC-Columbia.

Contact spanishprogram@sc.edu for information on applying of if you have any questions.

Our program is home to Sigma Delta Pi, the Spanish honor society. If you're accepted into the honor society you'll be eligible for awards scholarship and study abroad stipends from the National Sigma Delta Pi office and you'll be able to wear the colors of the honorary society at graduation.

To apply, fill out the application to Sigma Delta Pi (PDF)  and return it to Humanities Office 702.

Applications to the University of South Carolina are handled online and there are options for you to apply as an undergraduate or to graduate school.

Learn How to Apply » 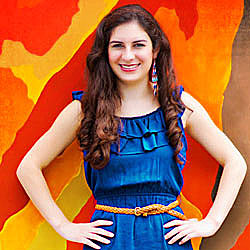 Natalie Pita believes in following her passions. For her, that means a triple major in Spanish, economics and international business with minors in dance and public relations.

Apply for the MAT

Did you know we offer a MAT program in French, German, and Spanish? Learn about the program.