We invite the community to participate in all signature events in the College of Arts and Sciences. These distinctive offerings demonstrate the breadth and depth of our scholarship, and are educational, celebratory and fun.

Join Us on Campus

Below is a sampling of events that are open to the public. You may also wish to consult with individual departments and programs for additional events, or you can view our complete events calendar.

The Caskey Lecture was established in 2004 by C. Thomas Caskey (1956 chemistry), M.D. and Chief Executive Officer and President of Cogene Biotech Ventures, to provide a public forum to address issues on the 21st-century impact of biotechnology on medicine. Held each year in the fall, the series brings to campus leading scientists who are on the cutting-edge of biotechnological discoveries with profound implications for medical diagnoses, treatments and cures.

The Nadine Beacham and Charlton F. Hall Sr. Visiting Lectureship in New Testament and Early Christianity was established by Columbia businessman Charlton F. Hall, Jr., owner of Charlton Hall Galleries, in memory of his parents. Held each year the week before Palm Sunday, the Hall Lectureship brings distinguished theologians and religious scholars to campus for the event, which is free and open to the public.

In creating the lectureship, Mr. Hall said, “By bringing to the university community a well-known religious leader or scholar, it is my hope to enhance the moral and spiritual well-being of the individual and promote peace and goodwill among all men.”

The History Center presents public lectures, symposia and forums that are designed to nurture scholarship, engage with the local community and promote scholarly communication in the department and around campus.

Joseph Cardinal Bernardin was a Columbia, SC, native, former student of the University and distinguished leader in the Roman Catholic Church. In his work as priest, archbishop of Chicago, author and public servant, he addressed the most profound social and ethical issues of our times.

Co-sponsored by the Women's and Gender Studies program and the College of Arts and Sciences, the Mary Baskin Waters Lecture series offers a closer look at various women's issues, such as women in sports and human rights in the face of extremism.

The Mayhew Lecture Series, conceived in 1988 to honor the memory of Dr. Bruce Mayhew, brings guest lecturers to campus to explore various sociology topics as they apply to our world today.

Located on the Horseshoe of the USC Columbia Campus, the Melton Memorial Observatory contains a 16-inch Cassegrain telescope that provides a stunning view of the night sky. The observatory is open to the public, for free, on Mondays between 8 p.m. and 10 p.m.

Each year for the Palmetto Lecture Series, the statistics department invites a renowned researcher to visit for a week. During that week, the visitor gives 2 research presentations (one technical and one more popular or accessible). The department also offers colloquia and other seminars open to the public.

The Physics and Astronomy Public Lecture Series began in 2016 with the goal of engaging the larger community with physics and astronomy. It is co-sponsored by the USC Provost and the Vice President for Research. Each speaker in this series gives an open colloquium, presented at a level approachable by any interested undergraduate students. In addition, each distinguished guest gives a public lecture on the university campus.

First inaugurated in 1997, the Robert Smalls Lecture series has grown from the African American Studies Program's strong sense of identification with South Carolina's history and culture, both past and present.

Through the generosity of benefactors the late Melvin and Judith Solomon of Charleston, and Samuel and Inez Tenenbaum of Columbia, a Jewish Studies endowment has been created to sponsor an annual lectureship, enhance the University library collection and establish a Chair of Jewish Studies.

The Solomon Tenenbaum Lectureship honors the memory of Samuel’s parents, Meyer Warren Tenenbaum and LaBelle Florence Tenenbaum. Samuel was encouraged toward inquiry and intellectual pursuits by his father, who often led thoughtful debates at the dinner table. Those interests were part of the motivation for the retired steel executive and his wife, head of the United States consumer Product Safety Commission and former South Carolina Superintendent of Education Inez Tenenbaum, to launch the Jewish Studies lectureship in 1990.

Among the high-profile figures who have visited campus through the series are Nobel Laureate Elie Weisel and New York Times columnist Thomas Friedman.

The School of Visual Art and Design regularly hosts visiting artists. The public is often welcome to attend talks and events with those artists. 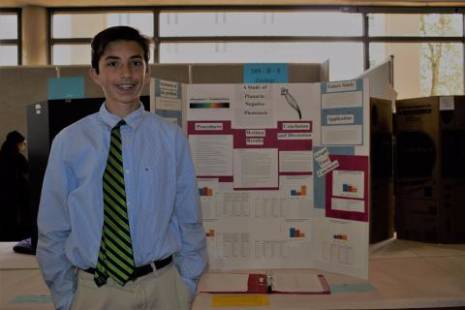 Join other students for our annual science fair.