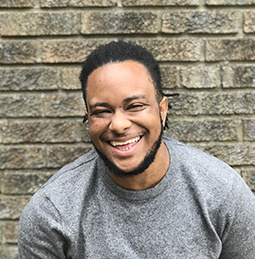 Bio: A South Carolina resident since birth, Kamau joined the History Department at the University of South Carolina in 2019 as a MA Candidate in History. His research and interests lie in historical narratives and oral histories of Black queer folks, particularly in the U.S. South. He plans to explore the ways Black queer and trans folks have historically created pathways of resistance and resiliency. With a bachelor’s degree in Women’s and Gender Studies and African American Studies, Kamau is also interested in Black masculinity and unpacking its relationship to white paternalism, supremacy, and patriarchy. His former work and accompanied zine, I Am a (Woe)man: A Collective Narrative of Black Transmasculine People in the United States, provides an historical analysis of Black masculinity, and shares narratives of Black transmasculine people to introduce new ways of how trans and gender non-conforming people are practicing Black masculinity. This piece awarded him the Consuela Francis Outstanding Student Award which recognizes seniors who exhibit outstanding interdisciplinary work within African American history, culture, or race in the United States. While in Charleston, he was also awarded Charleston’s 50th Most Progressive list in 2015 and the Community Activism Award in 2016. Kamau is currently a Graduate Teaching Assistant (GTA) in History and was formerly a teaching assistant at the College of Charleston within the Women’s and Gender Studies Department. Along with his scholarly work and pursuits, Kamau works with the Post-Landfill Action Network (PLAN) as a Special Projects Manager and is conducting research on Minority Serving Institutions (MSIs) and their roles in sustainability and student-led zero waste movement.