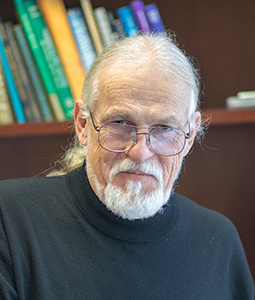 Dr. Anderton is Chair of the Department of Sociology and a College of Arts and Sciences Distinguished Professor. He is a Fellow of the American Association for the Advancement of Science, a Fellow of the American Statistical Association, an elected member of the Sociological Research Association, elected member of the International Statistical Institute and former Fellow of the Center for Advanced Study in Behavioral Sciences at Stanford. He came to the University of South Carolina from the University of Massachusetts-Amherst where he was Associate Dean for Research in the College of Social and Behavioral Sciences, Professor of Sociology, and Director of the Social and Demographic Research Institute. He also taught formerly as an Assistant Professor at the University of Chicago and was Associate Director of the Social Development Center.

Professor Anderton’s research emphasizes statistical demography with application to population-environment interactions, environmental health and historical demography. He is an author of over sixty major journal articles and several books, including Demography: Study of Human Populations (latest ed. 2015), Population of the United States (1998), Fertility on the Frontier (1993), an edited volume on Public Sociology (2006), and an series of eight volumes on Readings in Population Research Methodology (1997). He is continuing research on dimensions of morbidity and mortality transitions in the nineteenth century Northeastern U.S. and now completing work on a monograph entitled Manufacturing Grammars of Death which summarizes research funded by his most recent NIH and NSF sponsored historical research projects, The Grammars of Death (NIH) and Strengthening Qualitative Research in Longitudinal Analysis of Human Mortality (NSF). This research uses mathematical models to study the changing social meanings and precision in death classifications over the mortality transition in emerging industrial communities in nineteenth-century New England and the impact of such change on longitudinal analysis of mortality trends in historical and contemporary populations. His environmental health work includes studies on the Demographics of Dumping which were cited as one of the ten best environmental justice studies by a committee of the U.S. Senate Chaired by Sen. John Glenn and presented by invitation to both a meeting of the National Governors Association and the National Association of Manufacturers. Recent environmental interests focus on epigenetics and social epigenetics, including a series of research projects with Dr. Kathleen Arcaro to address Environmental Contaminants, Social Behavior, Methylation and Breast Cancer diagnostic evidence in human breast milk samples.