Students from the "Choreography I & 3-D Sculpture" class, a collaboration between the Dance Program and the School of Art, met with noted costume designer Alonzo V. Wilson to explore how wearable art can influence movement.

It was Mardi Gras in October for a lucky group of dance and art students, as they got up close and personal with elaborate costumes from the hit HBO® show, Treme.  The students are part of Choreography I & 3-D Sculpture, a collaborative class helmed by Associate Professor Tanya Wideman-Davis from the Dance Program and Assistant Professor Naomi Falk from the School of Art.

The class took advantage of the opportunity to gain insight from the creations of Treme costume designer Alonzo V. Wilson, who was at the University for the opening of a year-long exhibition of his work being housed at McKissick Museum.  Wilson’s massive feathered and beaded costumes are, in essence, wearable sculptures, and were a perfect source of inspiration.

Students met with Wilson on October 9 at McKissick, where they got the chance to wear the actual costumes, and explore how their structure and weight could influence movement.  The students then took twenty minutes to create “down and dirty” costume pieces of their own out of simple kraft paper and tape, and staged a “parade” of their works for Wilson.

“When we were designing the assignments for the course, Naomi mentioned that Alonzo would be in Columbia when the students would be working on the Costume and Sculpture project,” says Wideman-Davis.  “We decided to have him come to class to help facilitate ideas.” She adds that during one class session, Wilson said, “this course makes me want to go back to school.”

For their project, the students will create a wearable sculpture and a two-minute solo movement piece.  “They have the option of creating the sculpture first to inform the choreography, or the reverse,” says Wideman-Davis.  “It opens them up for the many possibilities of how to create solo work.”  The works will be presented in class between October 30 and November 8.

Wilson’s costumes for Treme have been lauded not just for their elaborate spectacle, but also for their cultural and historical accuracy.  The series dramatizes how the residents of New Orleans Treme neighborhood, a center of the city’s African-American and Creole cultures, rebuilt after the devastation of Hurricane Katrina.  Wilson worked directly with members of the city’s Mardi Gras Indian community to research and design the costumes.

In addition to Treme, Wilson is known for his design work on television series Army Wives, The Wire, and Snowfall.

WELL-SUITED: The Costumes of Alonzo V. Wilson for HBO’s Treme will be on display at McKissick Museum until July 2018. The exhibition includes nine ornate Mardi Gras Indian suits and costumes from select characters, as well as design sketches, film excerpts and video interviews with the show’s cast and costumers.

See the students in action with Wilson's costumes in this brief video. 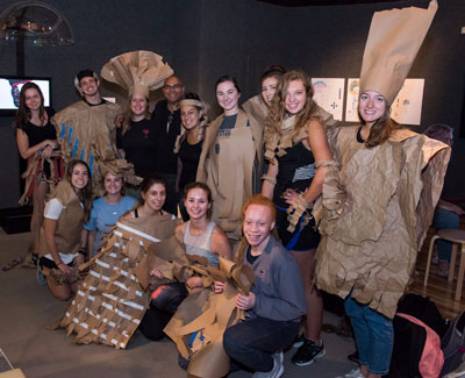 Students in their kraft paper creations.