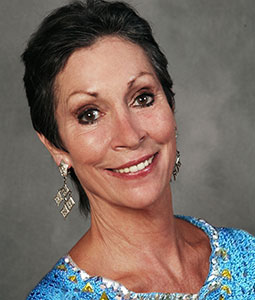 Professor Anderson is the founding director of the USC Dance Company, USC Dance Conservatory, and South Carolina Summer Dance Conservatory, which hosts international students and world-renowned faculty and choreographers.  Under her directorship, the dance program implemented a BA major in Dance Performance and Choreography in 2004, with concentrations in Ballet or Contemporary Dance. Soon after, the program added an emphasis in Dance Education, a K-12 Teacher Certification program, in partnership with the College of Education. Since this time, the dance program has become nationally recognized, earning distinction from Dance Magazine as one of the top three collegiate programs to consider for classical ballet study. The program now has more than 65 course offerings and approximately 3,000 students enroll each year taking dance courses.

Some of Susan Anderson’s professional artistic works include the creation of over 100 original ballets, such as Scheherazade, Ondine, Taming of the Shrew, Plant Dance (with artist Blue Sky), The Firebird, Peter Pan, Phantom of the Night, Crown Jewels, Sylvia, Carnival of the Animals, Pleasures of Paris, The Young Man and Death, and, most recently, The Bernstein Mass with the USC School of Music.  She has choreographed and taught master classes for the Gus Giordano Dance Company in Chicago, the University of California, Irvine, University of Buffalo, University of Georgia, Several Dancers Core in Atlanta, Murray State, Knoxville Dance Theatre, Loyola University, Inco Ballet in Colombia, South America, and the Stadtische Opera in Gera, Germany. Some of her recent achievements include the USC Dance Company selection by the American College Dance Festival to represent the southeast at the prestigious Kennedy Center in Washington DC, this past June.  She has also presented for the community the Alvin Ailey II American Dance Theatre, the Dance Theatre of Harlem, the Paul Taylor Dance Company, and Complexions.

Under her tenure Professor Anderson has secured grants to present reconstructions by Alwin Nikolais (Tensile Involvement), Twyla Tharp (Eight Jelly Rolls and Deuce Coupe), Lila York (Celts), Lynn Taylor-Corbett (The Great Galloping Gottschalk), Martha Graham (Diversion of Angels and Steps in the Street), and Paul Taylor (Company B) to name a few. Some of her scholarly works and publications span the investigation of  “Historic Dance Photography and Dance Pedagogy,” presented at the Hawaii University International Conferences on Arts and Humanities,  and Atiner Conference in Athens, Greece ; Baroque Dance Study Research and Productive Scholarship, New York Baroque Dance Company, and   “Somatic and Demographic Variables of Elite Female Dancers,” co-presenter with John Spurgeon, Ph.D., American Association for Health, Physical Education, Recreation and Dance, Anaheim, CA. To support and enhance the profile and scholarships of the USC Dance Program, Professor Anderson established the USC Board of Dance which hosts in conjunction with the Department of Theatre and Dance within the College of Arts and Sciences, the annual “Ballet Stars of New York Performance and Gala.” This star-studded event features stars of the New York City Ballet sharing the stage with the USC Dance Company presenting works from the Balanchine repertory as well as from Christopher Wheeldon, Justin Peck and Alexei Ratmansky.

The securing, design, and implementation of the new multi-million dollar USC Dance Center is one of her proudest personal achievements.   In June of 2018, Professor Anderson retired from USC, but was hired back to run the USC Board of Dance as well as produce the Ballet Stars of New York Performance and Gala. She also continues to teach as well as direct the SC Summer Dance Conservatory.  Susan was named Governor’s Professor of the Year in 2009, received the Michael J. Mungo SC Distinguished Professor award in 2009, and was the Carnegie Foundation’s SC Professor of the Year in 2011.