Americans are going to social media in massive numbers to talk about the coronavirus and their comments reflect a spectrum of emotions, ranging from fear, anxiety and sadness to more positive comments about the courage of health care workers on the frontlines, according to a new analysis by the Social Media Insights Lab at the University of South Carolina.

University researchers looked at 7,013,809 posts, primarily on Twitter, between March 19 and 20. Using a sophisticated artificial intelligence tool to categorize the comments, they found 31 percent were negative, reflecting fear about the disease and its economic impact, anger over those who ignore health warnings and sadness about deaths and hospitalizations. About 10 percent of the posts were seen as positive and 59 percent were seen as neutral.

“People on social media are taking the coronavirus very seriously,” says Kaitlyn Park, Insights Lab manager. “However, amidst these negative emotions there are positive posts about those working in the face of the crisis, especially health care professionals.”

Social media comments closely track the news of the day. When the Chicago aquarium released its penguins to roam the facility, the video went viral, reaching more than 90,000 mentions.

“Today, Twitter is on fire after disclosures that some in Congress may have sold stock while downplaying the significance of the virus,” Park says, adding that U.S. Sen. Richard Burr (R-N.C.) has been trending all day. “He has over 71,000 mentions in this two-day period, out-mentioned only by President Trump. One of the top retweets related to Burr has been shared over 31,000 times.”

The Insights Lab has been tracking social media conversations about the coronavirus since March 11 and will continue to issue insights and reports about this data.

The lab is part of the College of Information and Communications. It is used for teaching, academic research and public reports intended to help people better understand issues of the day. 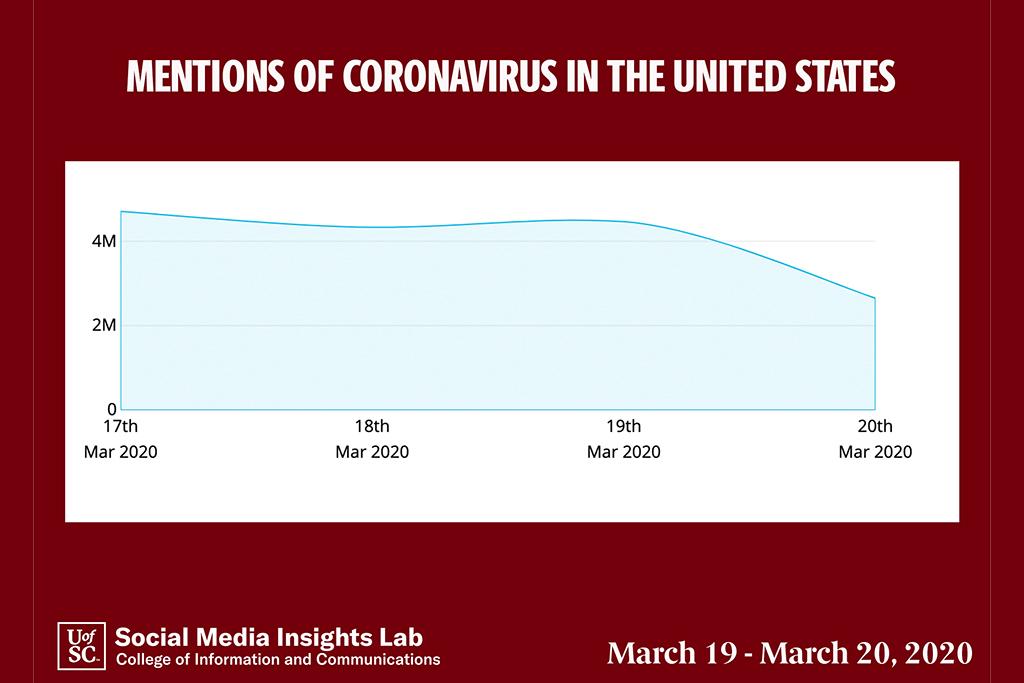