Posted March 28, 2016
Reprinted with Permission from the SCPA Bulletin

As Bender received his award at the luncheon, he said that he was speechless. "I can't think of a better group of people I'd want to spend a lifetime representing," he said.

He received a standing ovation at both the luncheon and dinner.

Bender is retiring from teaching at the end of this semester and will retire from his legal practice at the end of 2016. He will stay on for SCPA members as a backup attorney for Taylor Smith.

Bender’s newspaper career began in the late '60s as ad manager of The Gamecock at the University of South Carolina. He has represented SCPA and many of its newspapers since the early 1980s.

During his career, he has answered an estimated 19,000 calls from reporters and editors. He has fought for open records, fought subpoenas and argued media issues before the Supreme Court. Bender wrote the book on laws affecting S.C. newspapers.

NOTE: The SCPA will host a Roast of SCPA Attorney Jay Bender on April 22 at The Palmetto Club in Columbia. Proceeds will benefit the Freedom of Information Fund. The deadline to order tickets is April 15. More info » 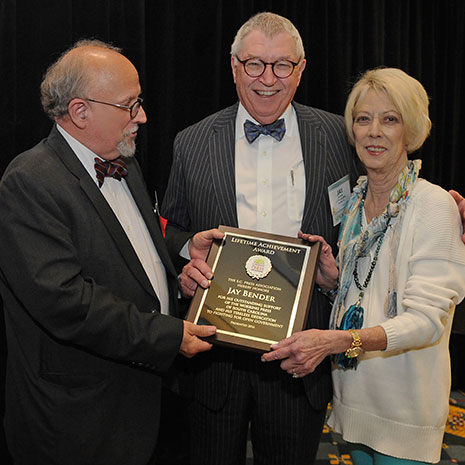 Bender holds the Reid H. Montgomery Freedom of Information Chair in the School of Journalism and Mass Communications. He teaches a course on law and ethics of mass communications.