Carolina Panthers quarterback Cam Newton wasn’t on the field for Sunday’s Super Bowl, but the ad he starred in for Buick was chosen as the winner of the Cocky’s Super Ad Poll. Watch the ad»

About 100 students and faculty members gathered in the School of Journalism and Mass Communications Sunday night to watch the game and critique the commercials. This is the 14th year students in Bonnie Drewniany’s Super Bowl of Advertising class have ranked the top commercials that air during the big game. The students grade the national commercials on likability, persuasiveness and brand identity.

The winning ad continues the carmaker’s “That’s a Buick?” theme, with the father of a pee-wee football player looking at a car that pulls into the parking lot and saying, “If that’s a Buick, then my kid is Cam Newton.” The kid is instantly transformed into the NFL quarterback.

The advertising team from Buick will be invited to campus to speak to the class, share behind-the-scenes stories about making the commercial and receive the coveted Cocky Award. Previous winners include T-Mobile (Ballogize, 2016)  Coca-Cola (Make it Happy, 2015), Cheerios (Gracie, 2014) and Budweiser (Brotherhood Clydesdales, 2013).

Ja’Qor Goodwin, a graduate student assistant in the Super Bowl of Advertising class, said the course offers students the opportunity to learn what goes into a good advertisement and understand how an ad can fit into an overall marketing campaign.

“The students take away an understanding of how to evaluate an ad. Does it fit in with the brand? What’s the message and is it a good message? And does it work?” Goodwin says.

Canon Blackwell, a senior advertising major from Greenville, says he’s not a football fan and has always watched the Super Bowl for the commercials.

“Last year, the ads were disappointing,” Blackwell said during the first quarter of Sunday’s game. “So far, the ones I’ve seen (in previews), have been clever, and there was one that made me cry.”

Madison MacDonald, a junior mass communications major from Greenville, changed her schedule this semester to be able to take the Super Bowl ad class. She says she hoped to come out of the class with a better understanding of what makes a commercial work. “I want to know more than ‘That’s funny' or ‘that’s not funny.’ I want to be able to recognize” why the ads work. 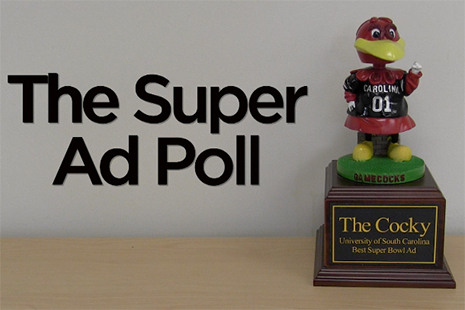 A look at what happens during the Super Bowl if you are in Prof. Bonnie Drewniany's Super Bowl of Advertising class.

The class ranked the Super Bowl ads for likability, persuasiveness and brand identity. And the winners are:

2. Mr. Clean - Cleaner of Your Dreams

The public voted in our online poll in the same categories that the class did: likability, persuasiveness and brand identity. And the winners are: