What do you do with the Scholastic Press Office?

I help the director (Leslie Dennis) with the day-to-day operations of SCSPA and SIPA, especially with our conferences and conventions. For instance, right now I’m reaching out to instructors we’d like to have come teach at SIPA in March. I’ve also taken on the project of compiling stories of SCSPA and SIPA graduates who are off in the world doing cool things. I interview them, learn a bit about their lives, then write the profiles and post them on the website, too.

You’ve been here a couple months now; how have you liked it so far?

I’ve really liked it. It’s a laid-back work environment, which I appreciate. I like being around journalism in any form, being around a college campus, being around people who really enjoy their jobs. It’s energizing, especially talking to and writing about people who are doing such interesting, impressive things, and who have such great things to say about SCSPA and SIPA. It’s nice to come to the office and be surrounded by that kind of positive environment.

You’re an English major but have experience with journalism. What is it?

When I was an undergraduate at Saginaw Valley State University (MI), I worked my way up through the student newspaper, The Valley Vanguard, from staff writer to sports editor to editor-in-chief. At the same time, I was freelancing for papers like the Detroit News and working part-time covering high school basketball for the Midland Daily News. I also worked for the communications department, writing press releases and short profiles for a faculty/staff publication, The Interior, under the great tutelage of SVSU’s media relations director.

Since 2013, when I came down to the University of South Carolina to do a Master of Fine Arts degree in creative writing, most of my nonfiction has been narrative rather than journalistic, but I’m looking forward to possibly doing some freelance sports journalism in the future.

How did journalism help you with your English studies?

Journalism taught me a lot about writing fiction, mostly through the process of revision — making stories striking and concise, eliminating the fat, wasting no words.

For me, it’s all storytelling. What interests me about journalism are the same things that interest me about fiction. It’s just getting to see (or imagine) what makes people tick, getting to spend a few minutes in their lives, getting to write about their evolutions or resistance to change.

Being from Michigan originally, what turned you on to South Carolina?

I wanted to get out of the Midwest — not because I hated it, but because I had been there my entire life and wanted to live somewhere new. I applied to MFA programs across the country and was offered a generous funding package from USC. Right away, I liked the laid-back atmosphere, especially in the MFA program but also in the city of Columbia as a whole.

Is there anything you miss about living there?

Evening breezes in the summer and fall. I’ll take Columbia in the winter, but I’d prefer more of a Michigan fall, which is really very nice before it descends into the miserable abyss of winter.

I miss my family. I miss SVSU. I miss shorter stoplights. Most of all, I miss Meijer — think Wal-Mart, but a hundred times better in almost every way.

You’re with SCSPA and SIPA now, but do you have any long-term goals?

I’m working on a novel I’d like to finish in the next year before sending it to agents. For the near future, I’d just like to keep writing and publishing while continuing to learn the ropes with SCSPA and SIPA.

Last question. What is your favorite animal?

I’ve got a soft spot for the surreal, which maybe explains why I love anteaters so much. Have you seen an anteater lately? They really shouldn’t exist. And they survive by eating ants? That’s absurd.

The squeak of basketball shoes on a court.

Job you most want?

Job you wouldn’t want to have?

A Visit From the Goon Squad by Jennifer Egan.

Probably not the greatest, but the team I’d most like to see: 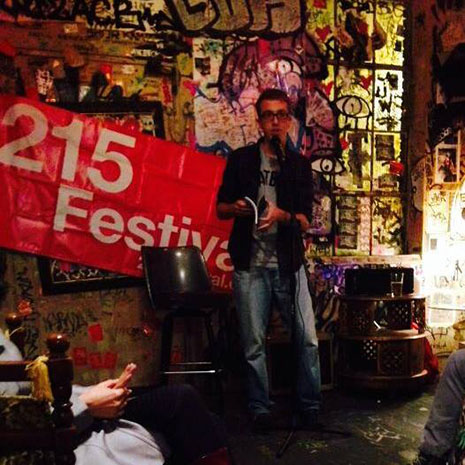 "What interests me about journalism are the same things that interest me about fiction. It’s just getting to see (or imagine) what makes people tick, getting to spend a few minutes in their lives, getting to write about their evolutions or resistance to change."