SIPA Stars is a showcase series that spotlights individual students, celebrates their content, and exemplifies good Southern journalism at work in scholastic classrooms.

Ebony Christie, our first SIPA Star, has the ability “to make you laugh and cry within a single story,” her adviser, A.J. Chambers, said.

Christie is the News Director of "RNE-TV" at Richland Northeast High School (Columbia, S.C.). She lights up every room she walks into, is a fearless leader, and strives to use her voice to make a difference, according to Chambers.

“I knew she had potential and would be an asset for her journalism program,” Dennis said. “She has been a stand out at 'RNE-TV’ and shows consistency in her work at both the state and regional level.”

Will Davidson, SIPA assistant and broadcast journalism major, worked with Christie for three years while he was at Richland Northeast.

“Ebony is the perfect person to be a SIPA Star,” Davidson said. “She has an incredible work ethic and is an incredible journalist. You can tell that in her work.”

Davidson said that to succeed at "RNE-TV," students have to be able to hold up to criticism. He said Christie always made the necessary changes to her pieces, and never missed a deadline.

“Mr. Chambers would always mention things about students he thought were rising stars, and Ebony was one of them. 'RNE-TV Live' would not have been as close to as good as it is now without her,” Davidson said.

Not only do both Davidson and Chambers describe Christie as a broadcast natural, but they also raved about her bubbly personality.

“I would describe Ebony as someone you kind of need to be friends with,” Davidson said. “She is so nice and a great person to talk to. She is always happy and upbeat which is always great, especially at like 8 a.m. when we are all in the newsroom tired.”

Her energy and smile shine through in her clips, as well as in her everyday life.

“She can talk about serious topics with a smile on her face and a natural conversational tone,” Chambers said. “She is by far one of the best on-camera reporters I have taught. More importantly, she reports stories of substance. She gives a voice to those underrepresented.”

An adviser or editor can recommend a student to be a SIPA Star through a short application process. Web and social media posts and letters to principal and local media outlets will be created to identify and spotlight the student selected 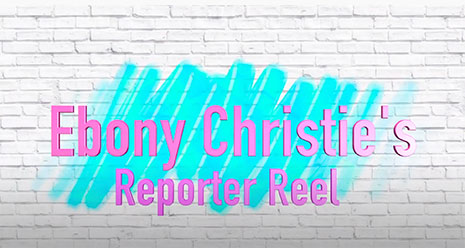 Ebony received Best of Show at the 2020 SIPA Convention for her reporter reel.