From print to online: Journalism over time

What exactly do journalists do? How can their efforts influence policy or make a positive difference within their communities? This profile is part of a project by students at the University of South Carolina School of Journalism and Mass Communications to explore the humanity of journalists, highlight the impact of their work and advocate for the profession’s value.

Allen Wallace has been a journalist since 1994 and has seen first-hand how technology has changed the game. According to Wallace, most people obtained news in the late 90s by reading the newspaper and watching two or three local TV stations along with one cable news network. With the creation of Facebook in 2004 and Twitter in 2006, social media allowed people to share news on their own.

“The internet changed everything,” says Wallace, who also works as communications manager for the College of Hospitality, Retail and Sport Management at the University of South Carolina. “Now, in a world where anyone can spread news, standing out from the crowd is much more difficult.”

Long-established news outlets all have their content in print and online coupled with a presence on social media. As news organizations shift toward digital content, establishing and maintaining trust with their readers is critical.

“No matter how the world changes, the ethics of journalism are essentially the same,” he says. “Tell the story accurately and without bias.” 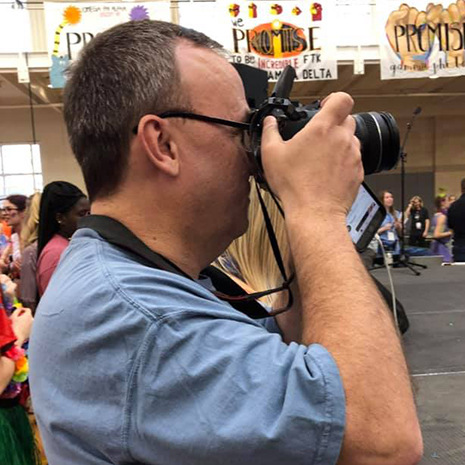 Wallace was one of the first reporters hired for the launch of ColaDaily.com and wrote the first story for the website.

He covered the Atlanta Olympics in 1996 as a radio news reporter and covered both a World Series and Superbowl as a sports reporter.

Wallace is currently in the final stages of writing a book about his last six years covering University of South Carolina’s Dance Marathon.