It was my first year in middle school when I found it – the list of swears. It was scrawled into the side of the wall on the school bus. The end of the k in f*ck had trailed off— the marker writing had melted. As I studied each word, I realized I had learned all of them before – stolen each of them away from my parents or the older neighbors with such quietness that it was unknown to even myself. Then emerged a new awareness as I read the N-word at the very bottom. Slurs were a different breed of word. Reading one felt as if I were doing something wrong.

Being White, I know there is a lifestyle in being a person of color that I will never understand. I only seem to recognize things as they are pointed out to me, the way a child might see the world; I see flits of this lifestyle and of prejudice in movies and books, but to call myself fully aware would be an overstatement. It’s easy to digest in these forms because I am not a part of the conversation. It’s easy to close a book, turn off the television, and resolve that racism is, in fact, bad. It’s easy to read because it’s private – quiet.

I’m reminded of my mother and her secret cigarettes, shrouded in a comfortable smoke. Though I might condemn her, I’m not one to talk. I’ve learned to regard the subject of race and Black people with fear – whether it be of them or of what they represent – in a self-perpetuating cycle of shame due to fear and fear due to shame. I find myself in a state of unrest when talking to a Black person because I am afraid I will unleash a river of slurs and bigotry that has been rippling below, as if there is something churning in the dark that I have yet to confront. Put simply, if I were stripped of everything that I am – my aspirations, my anxieties, a full ego death – I am afraid I would turn out to be a cigarette-smoking, sailor-swearing, racist fanatic who has dinner with your grandfather and brandishes the Hard-R as easily as if it were a gun in my holster, as if that were what I was born to do. But this image goes to the extreme, because I know, even now, I am trying to absolve myself of guilt. To make myself smaller.

I know I benefit from White privilege. I know I have biases. I know I’m not innocent. I learned to swear in such a way that I didn’t realize I had learned to swear until it was pointed out to me – lit ablaze – so who’s to say I haven’t learned prejudice as well? Who’s to say I haven’t turned a blind eye out of laziness? When reading James Baldwin’s Notes of a Native Son, I couldn’t help but see myself in the waitress at the diner – We don’t serve Negroes here. I watched her twiddle the notepad with this trembling, ugly fear, the same way I might flip through paragraphs of prejudice, fidgeting with that same awkwardness that makes me want to swear. F*ck. When Baldwin described – in intimate detail – his plan to strike her, to shatter her like the water mug, I realized I was cheering him on because I wanted her to hurt.

The red Expo marker of the k crept down the wall of the bus like I imagine the blood of the waitress, pooling neatly around her eyes and her cheeks. I scrubbed it away with an innate persistence and the tools that were available to me: my fingers and sweat. I remember feeling pride, as if order had been restored – as if it were a pivotal moment of survival. As if I had stood up against the extremists of the world with a loudness that they could not ignore. As if all of that shame and fear and bigotry had been contained to a mere smudge 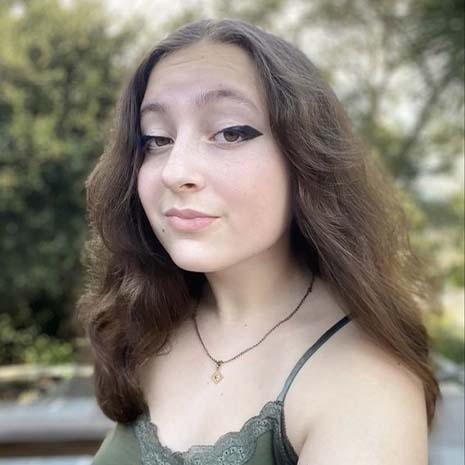 Bella Cosentino is a junior at Charleston County School of the Arts, where Danielle DeTiberus, F. Rutledge Hammes, and Elizabeth Webb Hart are her writing teachers. She is the daughter of Cheri and Joe Cosentino.