Since the 1960s, horror films have popularized provocative images of the monstrous-feminine that often present female sexuality and reproductive biology as grotesque, excessive, and/or dangerous. Unsurprisingly, many iconic cinematic female monsters are creations of male writers and directors. Presenting female sexuality as threatening to patriarchal order, films like Cronenberg’s The Brood and Friedkin’s The Exorcist voice fears of second-wave feminism and female sexual empowerment. Even after the third feminist wave, male directors have controlled the cinematic discourse on female monstrosity and victimization. In the wake of fourth-wave feminism, however, female directors have revolutionized the horror genre by presenting more complex depictions of both the monstrous-feminine and female horror heroines. Feminist body horror, subversive monstrosity, and more nuanced explorations of female sexuality and motherhood have emerged to shake up the status quo.

This proseminar revisits classic male-gaze depictions of the monstrous-feminine, explores progressive male-directed images of female monstrosity, and showcases the diversity and richness of recent horror films by women directors like Jennifer Kent (The Babadook, 2014), Ana Lily Amirpour (A Girl Walks Home Alone at Night, 2014), Stewart Thorndike (Lyle, 2014), and Julia Ducournau (Raw, 2017). Throughout the semester, students use feminist criticism and film theory to analyze images of female monsters, decoding the ideological subtexts embedded in both sexist and revolutionary depictions of the monstrous-feminine.

Each year, Julia Elliott collaborates with community partners like Columbia’s Nickelodeon Theatre, Women’s and Gender Studies at USofC, and the South Carolina Honor’s College to present a three-part feminist horror series during the Halloween season. Students work to market and create analytical and creative content for each series, whether hosted live at a local theatre or virtually through Educational Films at USofC. Past series at Nickelodeon Theatre include Medusa’s Gaze: the Monstrous Feminine (2018) and Weird Sisters: Power, Possession, and Feminine Abjection (2019). In October 2020, the South Carolina Honors College presented Haunted Moms: Motherhood, Monstrosity, and Horror, an online series co-sponsored by Women’s and Gender Studies at USofC. In October 2022, Family Trouble: Parenthood, Gender, and the Monstrous-Feminine will be screening at the Columbia Museum of Art and Richand Library Main. 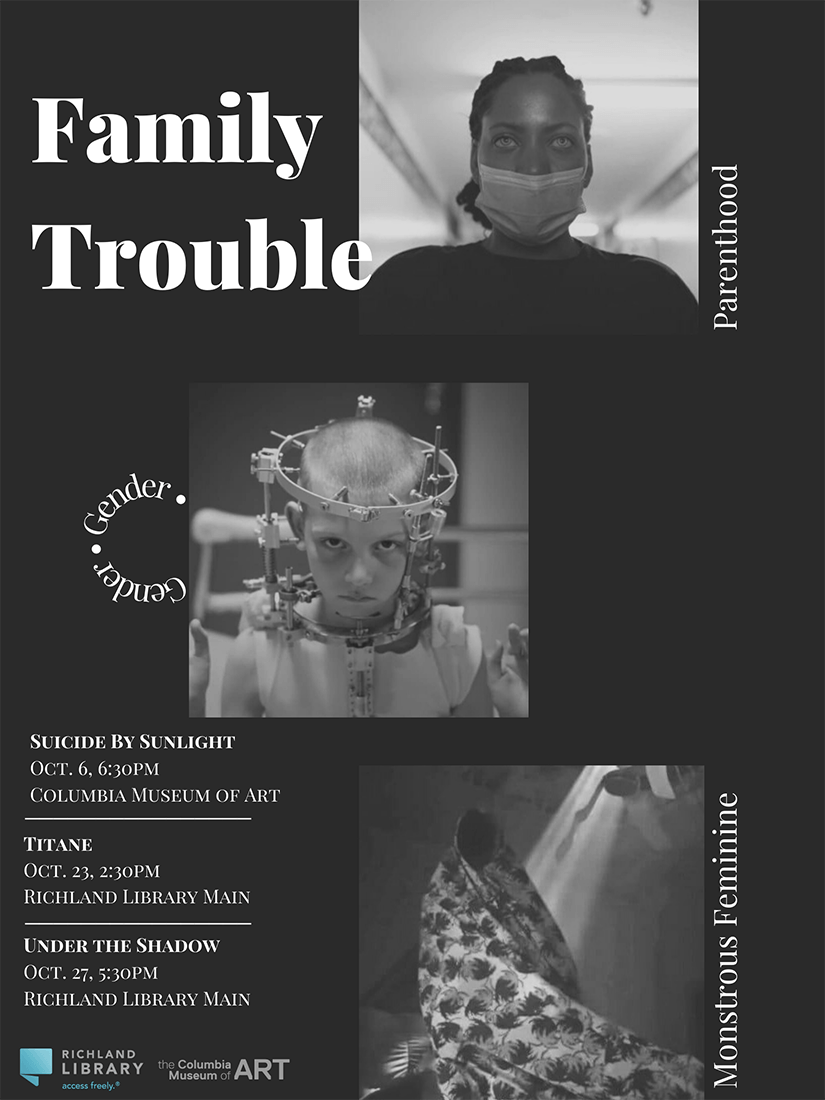 The Fall 2022 film series for this course is Family Trouble: Parenthood, Gender, and the Monstrous-Feminine. This series invites you to join three women on their journeys as they navigate patriarchal societies in which parenthood is both a responsibility and a vulnerability.

Learn more about the series and the highlighted films