When 2016 Darla Moore School of Business international business and marketing alumnus Alex Sullivan heard about the violence in Nigeria caused by Boko Haram from his friend Meghan Conroy, he didn’t let the distance prevent him from joining her in taking action.

At the end of last year, Conroy, a 2014 USC anthropology alumna, began a nonprofit called “Project Cyma” with the goal of giving Nigerians alternatives to the violence and terrorism that surrounds them. Sullivan has been on board since early spring and hopes to continue to see the nonprofit grow.

“The encompassing idea is to sprout opportunities,” Sullivan said of the nonprofit’s goals and how it got its name. “Cyma” is Latin for sprout.

Sullivan has been working diligently to gather information, write papers and find partners on the ground in Nigeria. What he likes most about the nonprofit, besides knowing he’s making a difference in people’s lives, is that, because the organization is so new, he has to take a self-directed approach to getting his work done.

“I like being able to call the shots,” he said.

On the other hand, the newness of the nonprofit is making it hard for their current fundraiser to stand out among the thousands of other nonprofit fundraisers.

“By far, the most challenging part has been being able to get enough attention, garner enough support and solidify ourselves as a valid organization,” Sullivan said.

If successful, this fundraiser will provide tablets to Peace Through Sports, a program currently running out of American University of Nigeria that involves a lot of young people in sports tournaments and job education training, the ultimate goal being to educate them for a future free of terrorism and violence. These tablets would be stocked with apps that illustrate ways participants can dig themselves out of poverty other than joining Boko Haram.

Sullivan is currently working toward his masters in global studies and international relations at Northeastern University online. After he graduates, he wants to continue working with an international nonprofit such as Cyma or work with a corporation that does business multinationally. 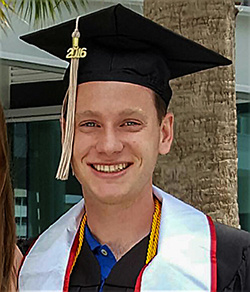 “The encompassing idea is to sprout opportunities,” Sullivan said of the nonprofit’s goals and how it got its name. “Cyma” is Latin for sprout.