The Morrisette family understands the importance of not only networking internationally, but also of giving back, which is why, when John Morrisette graduated from the Moore School in May 2017, they decided to donate $100,000 for a study abroad endowment.

“Study abroad was something that we felt strongly about as a family,” said Bill Morrisette, John’s father and CEO of Morrisette Paper Company. “That made writing the check easy.”

During John’s time at the Moore School, he was able to study marketing abroad, which inspired his current love of traveling as well as his desire to make a way for others to study abroad.

Because John didn’t know anyone before his trip, he “went in with an open mind” and made a lot of friends, some of whom he still keeps up with today.

“I hope this endowment gives people the opportunity to travel across the world to wherever they want to study,” John said of his time in London his sophomore year.

Those international connections are important to him as they make up a significant part of his network.

His father Bill recognizes the weight of a person’s network, too, and largely credits the connections he made through the university's parents advisory council for the positive experience he and his wife had with the school while John studied here.

“It’s all about relationships,” Bill said. “We felt like our son had a good experience, and the Moore School really welcomed us as parents throughout his time there, so we wanted to give back.”

The whole family is looking forward to seeing how the fund helps students in the coming years and what they’re able to learn abroad.

“In this global environment, exposure to other cultures is critical and will continue to be going forward,” Bill said. “We’re excited to be part of paving the way for other students to get that exposure.”

The endowment will be set up and available for use as early as the summer of 2018. 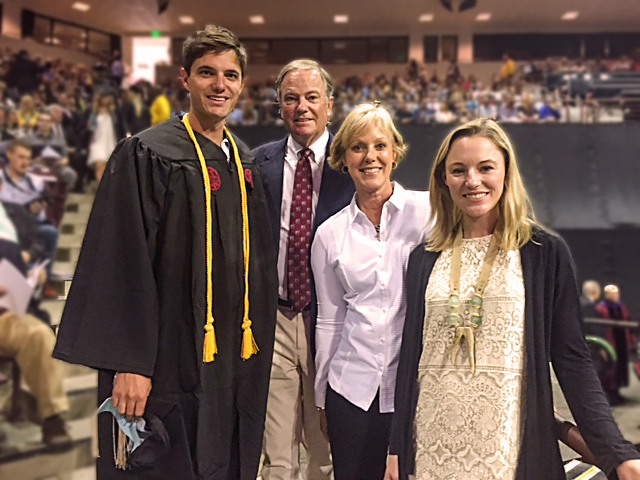 John Morrisette (left) graduated in May 2017 and went on to join the family business.