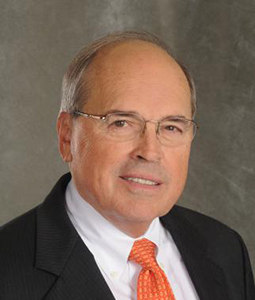 John W. Bachmann, senior partner of Edward Jones, grew up in Salem, Illinois. He received a Bachelor's Degree in Economics from Wabash College in Crawfordsville, Indiana, and an M.B.A. in Finance from Northwestern University in Evanston, Illinois.  Bachmann is the recipient of an honorary Doctor of Laws from Wabash College and an honorary Doctor of Arts from the University of Missouri-St. Louis.

Bachmann began his career at Edward Jones as a part-time college intern in 1959.  Upon completion of his formal education, he joined the firm full time.

Beginning in 1963, Bachmann spent seven years as a retail investment representative in Columbia, Missouri, and in 1970 returned to St. Louis as a partner with responsibility for fixed-income product marketing. He later gained experience in strategic planning, corporate finance and technology.

In 1980, Bachmann succeeded Edward D. "Ted" Jones Jr. as managing partner of Edward Jones. Bachmann built upon Jones' philosophy of serving the needs of individual investors from one-investment-representative offices. This included using technology in a way that directly benefited, yet was transparent to, individual investors. During Bachmann's tenure, Edward Jones grew from 200 offices in 28 states to more than 9,000 offices throughout the United States, as well as affiliates in Canada and the United Kingdom.

In 2002 and 2003, Edward Jones was ranked No. 1 in Fortune magazine’s annual listing of "100 Best Companies to Work For" in America, and it received similar honors from Canadian publications. The company also was ranked:

After 24 years in the role, Bachmann stepped down as managing partner and became senior partner in December 2003. Bachmann served two terms as chairman of the Securities Industry Association in 1987 and 1988, a time of great turbulence because of the October 1987 stock market crash.

Bachmann's  past outside activities include: director, the National Association of Securities Dealers; chairman, U.S. Chamber of Commerce (2004-2005); campaign chairman, United Way of Greater St. Louis (2002); chairman, St. Louis Regional Chamber and Growth Association (2000-2002); and chairman of the St. Louis Symphony Orchestra. His current outside activities include:  member of the Executive Committee of the U.S. Chamber of Commerce; trustee emeritus of Wabash College; chairman of the Board of Visitors of the Peter F. Drucker Center; trustee of the Claremont Graduate University; trustee of Washington University in St. Louis; commissioner of the St. Louis Science Center; director of AMR Corporation, American Airlines, Inc; and director of The Monsanto Company.

Bachmann joined the University of South Carolina’s Darla Moore School of Business as the school’s first distinguished executive in residence in 2005.