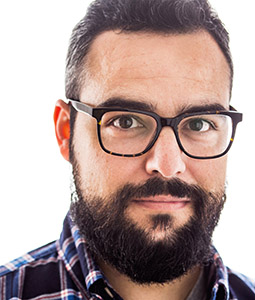 Bruno Alcalde holds a Ph.D. in music theory and cognition from Northwestern University (2017), an M.M. in Music Theory from Indiana University (2012), and a B.M. in music composition from Universidade Federal do Rio Grande do Sul (2008, Brazil). Before teaching at University of South Carolina, Alcalde has worked at University of Richmond and Universidade do Vale do Rio dos Sinos (Brazil). His main research interests are musical style and genre, hybridity in music, and communicational issues of 20th-century music. Other interests include topic theory, situated cognition, and the study of record production in popular music, and his work on these areas has been presented in the United States and abroad. His recent research develops an analytical framework for mixtures of style and genre in music.

Alcalde's main instrument is electric guitar and he has been performing with rock, jazz, and Brazilian music groups throughout the years. As a composer, he has worked in a variety of styles and genres, embracing popular music, chamber music, and soundtracks.