Three months after Michael Brown Jr., an unarmed black teenager, was shot and killed by a white police officer in the St. Louis suburb of Ferguson, Mo. on Aug. 9, 2014, Missouri Governor Jay Nixon created the Ferguson commission to conduct a “thorough, wide-ranging and unflinching study of the social and economic conditions that impede progress, equity and safety in the St. Louis region.” Rev. Starsky D. Wilson was appointed co-chair of the Ferguson Commission and recently discussed how the University of South Carolina community can help create a more equitable society during an event co-sponsored by the College of Social Work’s I. DeQuincey Newman Institute for Peace and Social Justice.

Rev. Wilson presented, “The Truth of Reconciliation: Leadership for American Apartheid,” earlier this month at the Booker T. Washington Auditorium. He discussed how current systems are set up to keep people of color at the margins, regarding education, housing, employment, access to health care and economic investment. Rev. Wilson argued that the white minority retains power that has been entrenched since our country’s founding by passing laws and regulations that keep people of color from gaining access to positions of power.

“Rev. Wilson’s visit was important because we need to deepen our critical conversations about race in America, particularly as we reflect upon and prepare for local, state and federal elections,” said Kirk Foster, Associate Dean for Diversity, Equity and Inclusion. “The College of Social Work aims be a leader in these conversations and training social workers who will transform systems for all people to have a place at the table.”

Master of Social Work student Sarah Hunter, who is also president of the college’s Student Empowerment Resource Group (SERG), was impressed by Rev. Wilson’s talk and his perspectives.

“He (Rev. Wilson) talked about an apartheid happening to the black community and provided a new way to look at the current situation,” said Hunter. “His unique perspective on what is means to be Black and African American caused me to reignite my interest in not only the Ferguson incident but other racially-charged issues. He did a good job at explaining the issues and providing some contextual analysis.”

Rev. Wilson is currently president and CEO of Deaconess Foundation, a faith-based grant making organization devoted to advancing child well-being in St. Louis through racial equality and public policy change. As co-chair of the Ferguson Commission, Starsky was instrumental in policy reform focused on housing, income and employment, health care access, and education for the St. Louis metropolitan area. In 2015, the Ferguson Commission released the ground-breaking, Forward Through Ferguson: A Path Toward Racial Equity report, calling for sweeping changes in policing, the courts, child well-being and economic mobility.

“Rev. Wilson is a nationally-recognized civil rights speaker and activist,” said Foster. “He has devoted his life to breaking down the walls of injustice and building strong communities rooted in equity. Rev. Wilson encouraged us all to become engaged in dismantling the system of disenfranchisement that plagues our country.” 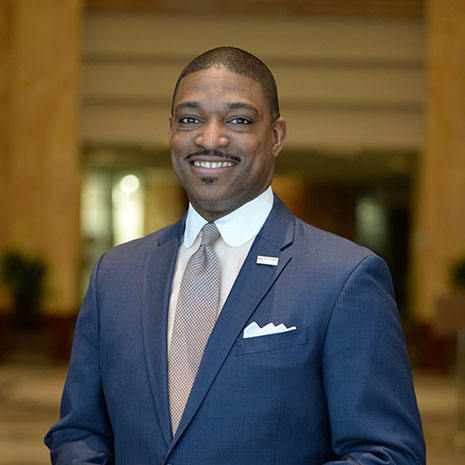 The Truth of Reconciliation: Leadership for American Apartheid

While leading St. John’s United Church of Christ (The Beloved Community), an inter-racial, inner-city congregation in St. Louis from 2008 to 2018, Rev. Wilson led activism on a variety of issues, including youth violence prevention, Medicaid expansion and voter mobilization.