According to UNICEF, there are an estimated 52 million orphans in Africa. Approximately a third of orphans have had at least one parent die from AIDS, while others lost parents due to disease, the effects of poverty, regional conflict and war. Once orphaned, the children are also highly vulnerable to abuse and neglect, child labor, loss of schooling, home and community supports, and extreme poverty. Whether they are cared for in orphanages or in the community, the caregivers lack training to respond to the children’s profound needs. Since 2014, Clinical Assistant Professor Patrice Penney has provided training for more than 1,000 African caregivers, teachers, social workers and others in nine sub-Saharan African countries through her Initiative for Children at Risk Africa program.

Penney, who lived in Africa for 10 years from 2003 to 2013, launched ICARA in 2014. According to Penney, most at-risk children in Africa will never have a trained professional working with them. Caregivers may have responsibility for anywhere from 12 to 50 children and are completely overwhelmed with little or no access to community support.

“The predominant response has been to pay attention to their physical needs, but often the psychosocial needs have not been met,” Penney says.

The mission of the organization is to nurture the hearts of Africa’s orphaned and vulnerable children through caregiver training, resources, interventions, research and advocacy.

“ICARA was launched out of my work in Africa on behalf of vulnerable children,” Penney says. “I've developed curriculum that helps caregivers understand basic child development, attachment security between parents and children, and what happens when these children have experienced trauma, through orphaning and other traumatic experiences. They often have an accumulation of risk factors and very significant challenges, so my goal with ICARA was to train the people closest to the kids to help understand them to begin the healing process.”

Penney made two trips to Africa this past summer. She was accompanied by 2019 Master of Social Work graduates, Kayla Merkel and Caytlin Merritt, to the southern African kingdom of Lesotho in May. Over four days, she trained 75 officers and counselors of Lesotho’s national police force. After negative press about police brutality, which had led to community members not reporting crimes due to fear, ICARA was invited to train the police force in trauma-informed policing, both for understanding victims and themselves. The training included a practical focus on interviewing victims, responding to crises, community and family-oriented policing, and counseling victims and police officers.

People who have been trained often say that it’s been life-changing.

Penney also offered trauma-informed training for social workers who will be working in child welfare and child protection. The Lesotho national child protection officers were also trained on trauma-informed practice with child welfare. They work across the country, responding to situations of orphaning, abuse and neglect. ICARA not only provides trainings, but trains local African trainers, who will sustain the training effort regionally. During her trip in May, Penney prepared a group of trainers who will conduct trauma-informed caregiving trainings across programs for vulnerable children in Lesotho, including orphanages, schools, feeding centers and projects for children on the street.

Penney returned to Africa in August with two more 2019 MSW graduates, Hayley Cannon and Lainey Mannix. At an orphanage in rural Kenya, ICARA provided interventions for an extended research project with orphans and their caregivers through teaching trauma-informed, nurturing caregiving and developing play groups. The research, in collaboration with Lubbock Christian University, is studying whether stress levels decrease in orphaned children with more nurturing caregiving. Preliminary results suggest very positive changes. In Nairobi, ICARA was invited to train several organizations working in Kibera, the largest slum in Africa, which is home to more than one million inhabitants. They received training they can utilize in schools, projects reaching out to street children, and community orphan care.

“I was thrilled to bring students with me this summer,” Penney says. “It was a powerful opportunity for them to be immersed in new cultures, to participate in the caregiver training, listen to caregivers and listen to the children’s stories.”

Penney’s experiences with ICARA have also influenced her teaching, and she often shares her stories with College of Social Work students.

“I think it’s critical to encourage students to think about international social work contexts. It is an exercise in cultural curiosity and humility, in which we learn about others, ourselves and the assumptions we make,” Penney says. “We also explore human issues such as loss, development, abuse and neglect, trauma, and family dynamics, and they find they are human issues as well as issues that are profoundly shaped by different cultural contexts. This process of cultural engagement should enrich us and help us navigate complexity and diversity as we seek to serve children and families in social work.”

Penney’s time in Africa involves intensive trainings and travel to various locations across the continent. While the pace can be exhausting, she feels very welcomed by the African organizations and delighted to interact with the caregivers and children.

“People who have been trained often say that it’s been life-changing,” Penney says. “They become more aware of the psychosocial needs of the children and are more tuned in to developing nurturing relationships with them, as well as their own kids. They also often recognize their own need for healing and become more passionate about addressing systemic issues in their own culture.” 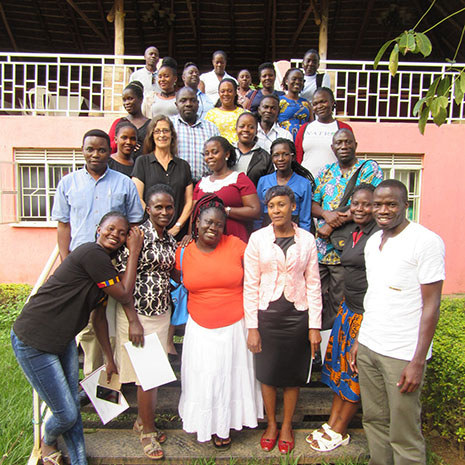 “I think it’s critical to encourage students to think about international social work contexts. It is an exercise in cultural curiosity and humility, in which we learn about others, ourselves and the assumptions we make.”