A series of articles in The Washington Post in 2007 exposed inadequate conditions at the U.S. Army’s Walter Reed Medical Center in Washington, D.C. As the Iraq War continued throughout 2008, the Army spent $1.2 billion to establish 45 Warrior Transition Units to better treat wounded servicemembers. Associate Professor Nikki Wooten, a lieutenant colonel in the U.S Army Reserves with more than 30 years of military service, is conducting a multi-year study on behavioral health in WTUs.

Wooten is principal investigator on a National Institute on Drug Abuse study, Behavioral Health Care in Army Warrior Transition Units, also known as the Army Warrior Care Project. Professor Sue Levkoff also served as primary mentor related to grantsmanship and project management. The research examines military service and deployment-related factors associated with behavioral health problems and service utilization of U.S. Army servicemembers who were assigned to WTUs after returning from Iraq and Afghanistan deployments. The cutting-edge research is the first study to characterize redeployed U.S. Army servicemembers assigned to WTUs. According to Wooten, this is a high-risk, understudied group of war veterans, which includes the most severely injured Army servicemembers assigned to the Army Wounded Warrior Program.

“A number of my family and friends spent time in WTUs, and I became interested in their diagnoses and the type of care they received,” Wooten said. “Since no one else had conducted research on WTUs, I wanted to know whether they were effective because they replaced what we knew for more than 20 years as medical hold units. Servicemembers would often linger in these units for two years or more because instead of deploying, they stayed in the medical hold units until all their medical conditions were addressed. I was also concerned about how people were changed by their wartime experiences and injuries. War changes people, but it also changes families.”

The Army Warrior Care Project analyzed U. S. Department of Defense Military Health System data to examine behavioral health problems and service utilization among Army soldiers assigned to WTUs after returning from Afghanistan and Iraq deployments between fiscal year 2008 to 2015. WTUs were initially established to address physical and psychological conditions, but the U.S. Government Accountability Office reported in 2016 that behavioral health diagnoses among WTU soldiers between 2008 and 2015 increased from 36 percent to 52 percent. Diagnoses included post-traumatic stress disorder, depression and anxiety. Mental health, substance use disorders, risky drinking and psychosocial problems were identified as risk factors for preventable deaths among WTU soldiers.

“Even though a number of WTUs have been deactivated since 2012, the plan is that if we go to war again, these units will be reactivated to address the physical and psychological injuries of service members."

Wooten and her colleagues discovered that 3.5 percent (31,094) of the Army Warrior Care Project cohort (883,091) were assigned to WTUs, and the median time spent in a WTU was 327 days. In addition, 77.3 percent were assigned before their deployment end date, while 59.4 percent received behavioral health diagnoses within a year of returning from their deployment. Wooten’s team concluded that active duty WTU soldiers had a higher prevalence of mental health and substance use disorders.

“When I started looking at the timing of WTU assignment, relative to the service members deployment prior to their WTU begin date, it was interesting to find that a large proportion of active duty members were assigned to the WTU either before the deployment ended or within the first 30 days,” Wooten said. “Another large percentage (40.7 percent) of active duty were assigned to a WTU more than a year after they returned home from deployment. But for National Guard and Reservists, the majority were assigned to WTUs before their deployment ended or within 30 days after deployment ended. I was interested in the differences in the timing of WTUs assignment by military service component because U.S. Army Active, National Guard and Reserve servicemembers may experience and react to combat deployments differently.”

As the longest war in American history, servicemembers were deployed multiple times during Afghanistan and Iraq Wars. Wooten believed this was a unique situation that can impact behavioral health outcomes among individuals identified to have experienced severe physical and psychological injuries - servicemembers sent to WTUs.

“There were several changes in military health care over the course of the war,” Wooten said. “WTU's were initially established to address physical injuries, but then reports showed that more than 50 percent of soldiers also had behavioral health problems. WTUs had to change the provision of healthcare to address behavioral health conditions.”

Wooten hopes the AWCP findings will help military leaders and military health policymakers better understand behavioral health problems among redeployed soldiers that could potentially have long-term effects from war. This actionable data is intended to provide evidence to inform future improvements in behavioral health care in the Military Health System.

“Even though a number of WTUs have been deactivated since 2012, the plan is that if we go to war again, these units will be reactivated to address the physical and psychological injuries of service members,” Wooten said. “I think overall the study has some implications for future use and modification of how the WTUs function as part of the Military Health System. There is more that can be studied and addressed as we consider strategies to ensure warfighters received the best healthcare possible.” 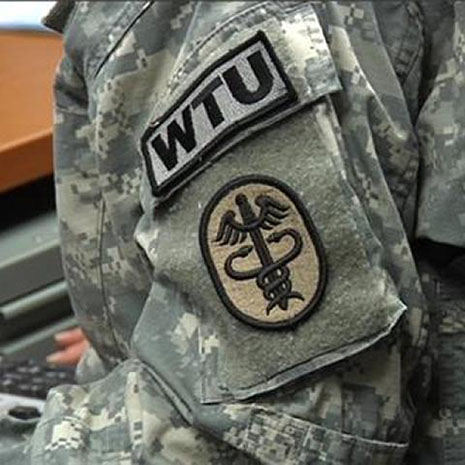