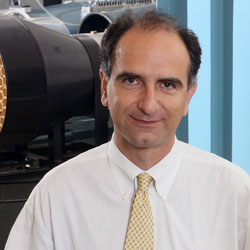 Hossein Haj-Hariri has been named the new dean of the College of Engineering and Computing.

A distinguished engineering researcher with experience in forming industry partnerships has been hired to lead the University of South Carolina’s College of Engineering and Computing.

Hossein Haj-Hariri, an MIT-trained scientist who most recently served as professor and chair of the Department of Mechanical and Aerospace Engineering at the University of Virginia in Charlottesville, was appointed dean on Tuesday. Haj-Hariri will spearhead efforts to build on the university’s strength in critical research areas such as energy, cyber security, aerospace and materials.

UofSC’s emphasis on quality teaching and its commitment to industry partnerships, such as the McNair Center’s recent aerospace research deal with Boeing, makes it an attractive destination, Haj-Hariri says. “I’m very impressed that the university and the state have a desire to work together, and that the university is viewed as an engine that can grow the economy. That’s not always the case in other states,” he says.

Originally from Iran, Haj-Hariri earned his undergraduate and graduate degrees from Massachusetts Institute of Technology. He joined the University of Virginia in 1988 and served as a visiting faculty member at Arizona State University and Stanford University.

“Dr. Haj-Hariri has a distinguished record in teaching, research and forging partnerships with industry,” says UofSC Provost Joan Gabel. “I am confident he will provide the leadership needed to continue the College of Engineering and Computing’s tradition of producing important research and preparing students for rewarding careers in high-demand fields.”

While at Virginia, Haj-Hariri encouraged interdisciplinary research and helped shepherd a research deal with Rolls-Royce that established a “rapid prototyping lab” at the school. The project later spawned a partnership with UVA’s School of Education, Princeton University and the Smithsonian to improve STEM education in the state’s public schools. By designing machines and creating working 3D prototypes, students get a hands-on lesson in the entire engineering process, as well as the science and math underpinning the process.

Haj-Hariri also helped establish the Technology Leaders program for undergraduates that allows top engineering students from different disciplines to work together to solve complex problems.  “Many of the projects I’ve worked with are scalable, and I would love to bring some of these ideas to South Carolina,” he says.

The College of Engineering and Computing has more than 110 faculty in five departments and serves approximately 2,700 students — 2,200 undergraduates, and more than 500 graduate students. It is dedicated to advancing innovative research and providing students with the skills they need to compete in high-demand technical fields. As the new dean, Haj-Hariri succeeds Tony Ambler, who has assumed a new role with UofSC’s Office of Economic Engagement.

Haj-Hariri’s own research is in the field of fluid dynamics, which has many practical applications in the aerospace field. The holder of numerous patents, he focuses on the way different animals and fish, such as manta rays, move through fluids. “There is great efficiency in nature. If we can better understand it, we can perhaps improve upon it and apply to real world problems,” he says.