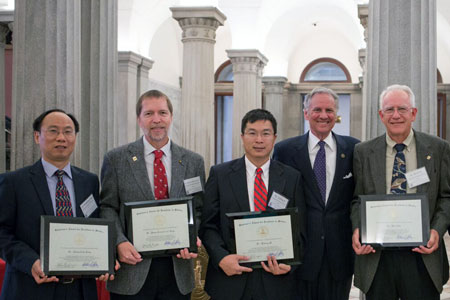 University of South Carolina researchers took home four prizes at Monday’s 2016 Governor’s Awards for Excellence in Science, a clean sweep for Carolina in all categories.

The prizes, presented by Lt. Gov. Henry McMaster at a Statehouse ceremony, have been awarded to top South Carolina researchers since 1989 and are designed to celebrate achievement in an array of scientific fields. This year’s winners include three from the College of Arts and Sciences in Columbia and a USC Beaufort mathematician. All the winners received a $1,000 prize. They are:

Governor’s Award for Excellence in Scientific Research: Hans-Conrad zur Loye, associate dean for research and graduate education and David W. Robinson Palmetto Professor of Chemistry in the department of chemistry and biochemistry. Arriving at Carolina in 1996, zur Loye has been awarded millions of dollars in research funding, published hundreds of journal articles and trained students at all academic levels. His research includes the study of inorganic materials to create new materials with novel electronic and magnetic properties.

Governor’s Award for Excellence in Scientific Awareness: Bert Ely, professor of biology in the department of biological sciences and director of the Center for Science Education. Ely has worked at Carolina since 1973, teaching undergraduate courses every semester and providing research opportunities in his laboratory for more than 200 undergraduates and 30 graduate students. He has mentored many minority graduate students, and eight minority students from his laboratory have earned their doctoral degrees in the past eight years. His research focuses on bacterial, fish and human genetics.

Governor’s Young Scientist Award for Excellence in Scientific Research: Chuanbing Tang, associate professor of chemistry and College of Arts and Sciences Distinguished Professor in the department of chemistry and biochemistry. Over the six years since Tang joined the faculty, he has trained 16 graduate students, 18 undergraduate students, a dozen postdoctoral scholars as well as a number of high school students. He has authored or co-authored about 90 journal articles while securing nearly $5 million in external research funding. His research focuses on creating sustainable polymers from biomass, metal-containing  polymers and polymers  for biomedical applications.

Governor’s Award for Excellence in Scientific Research at a Predominantly Undergraduate Institution: Yiming Ji, professor of computational science in the department of mathematics and computational science at USC Beaufort. Ji was one of the first professors to be honored with a Breakthrough Star award in 2010 and has consistently received external research funding awards from the National Science Foundation, including EPSCOR RII awards that are designed to help build collaborative research teams working on key NSF projects. In the past decade of teaching, Ji has taught more than 80 classes covering 22 subject areas. His primary research interests include wireless communication networks, data analysis, image processing and scientific computations.

“I am so pleased to congratulate professors zur Loye, Ely, Tang and Ji for the major accomplishment this represents for each of them,” Nagarkatti said. “Each one of these scientists continues to make major contributions to his respective field, provides top-quality educational opportunities for his students and reflects the excellence that abounds here at the University of South Carolina.”

In addition to the Carolina researchers, Carol Jantzen of the Savannah River National Laboratory was also recognized for Excellence in Scientific Research. She was the sole non-university honoree.

Since 1989, the awards have been under the joint sponsorship of the governor’s office and South Carolina Academy of Science. The awards are currently supported by MeadWestvaco, Specialty Chemicals Division and the South Carolina Research Authority.