Eva Schloss, a Holocaust survivor and the stepsister of Anne Frank, will share her childhood and wartime experiences at the University of South Carolina’s President’s Leadership Dialogue at 10 a.m., Feb. 27, at the Koger Center.

The dialogue is part of the university’s Carolina Leadership Initiative, which fosters leadership development among students and makes leaders from various fields and backgrounds available to students and the community. 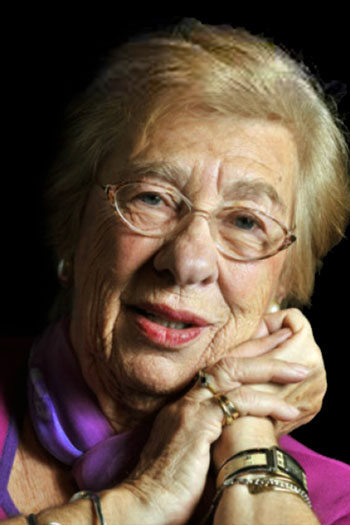 Schloss, born Eva Geiringer, was just 8 years old when Germany annexed Austria in 1938, causing many Jewish families to flee Austria to avoid persecution. She, along with her mother, brother and father, moved first to Belgium and then to Holland, where one of her neighbors was a German-Jewish girl named Anne Frank.

The two girls became friends and playmates, passing the time by skipping and playing hopscotch and marbles. Ultimately, both girls and their families were deported to the Auschwitz concentration camp. Anne did not survive, but the diary she kept during her two years in hiding from the Nazis has been published in 60 languages and read by millions around the world.

Schloss' mother eventually married Anne Frank’s father, who was the only member of his family to survive the concentration camp. Schloss made her way to England, where she married Zvi Schloss and raised three daughters. She worked as a studio photographer and ran an antique shop.

Since 1985, Schloss has devoted herself to Holocaust education and global peace. She has recounted her wartime experiences in more than 1,000 speaking engagements. She has written two books and has had a play written about her life. Her story is dramatic and difficult to imagine, yet her insightful message reminds us that life is precious and fragile, the creative spirit is stronger than fear and the power of good is immeasurable.

"How fortunate we are to have this opportunity to learn about strength, survival and resilience from Holocaust survivor Eva Schloss,” said President Harris Pastides. "I have no doubt that as she recounts her journey from childhood to Auschwitz to her ongoing quest for global peace, we will find ourselves celebrating her life as we re-examine our own.”

Admission to the Feb. 27 dialogue is free and open to the public, but tickets are limited. Tickets are available at the Koger Center box office 9 a.m.-5 p.m, Monday-Friday.

Attendees also will be able to view two Holocaust exhibits in the Koger Center lobby the day of the event. A traveling exhibit about the life and times of Schloss’ stepsister, Anne Frank, will be on display. The exhibit is part of a multiyear collaboration of the College of Education, the Anne Frank House, and the Anne Frank Center of New York. The College of Education’s Teaching Fellows program and Center for Educational Partnerships trains students to be peer guides for the exhibit in schools across the state. Peer guides develop an awareness of social justice issues within society and learn to discuss challenging and complex issues with their peers and community members.

Many South Carolinians not only had a role in the liberation of the camps, but also were Holocaust survivors. Stories of S.C. liberators and survivors are featured in the other exhibit, "Holocaust Remembered," which can also be seen at McKissick Museum. The exhibit is a collaboration between the museum and the Columbia Holocaust Education Commission.