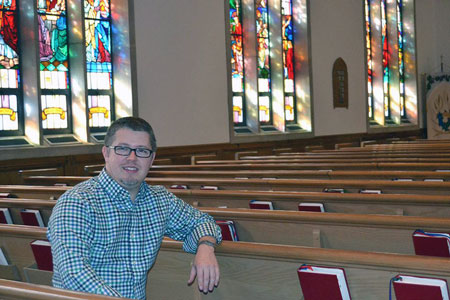 Like many other UofSC music students, Jason Wright, a doctoral candidate in choral conducting, is adding to Columbia's musical soundscape by offering his talents to music organizations and churches throughout the city.

“Sopranos, you’re slightly beneath the pitch. Here are your notes,” says Jason Wright as he plays the correct pitches on the piano and the women match the notes. It’s Wednesday night at Incarnation Lutheran Church and members of the Chancel Choir are preparing for Sunday’s service. “That’s it. Lovely. Keep going,” says Wright, the School of Music graduate student who’s leading the ensemble.

From major ensembles like the South Carolina Philharmonic to small chamber groups to numerous churches and community organizations throughout the area, Carolina musicians offer their talents to the Midland’s soundscape. “Our students are in constant demand as singers, conductors and instrumentalists in churches and other music organizations,” says Tayloe Harding, dean of the School of Music. “They perform and lead music in houses of worship as well as teach and perform for organizations of all kinds throughout the region, providing untold hours of music listening and music making opportunities for South Carolinians.”

Pastor Mary Anderson of Incarnation knows from experience in Chicago the benefits of having music students active in congregations. “I've long wanted to establish a stronger relationship with Carolina as I had with the music schools at Northwestern and DePaul universities,” she says. “I'm intrigued by the possible partnerships that can exist between USC and our congregation as we work together for our mutual benefit.”

Wright is wrapping up his first semester as a doctoral candidate in choral conducting. For the past several months, he also has been the interim cantor and organist at the granite-clad Lutheran church on Devine Street in Columbia, where his contributions have already made a difference. “The most noticeable improvement is our diction and dynamics,” says Mary Kehl, a lifelong congregant and choir member.

Directing church musicians is a familiar role for the North Carolina native who has been a music director in Episcopal, Lutheran and Methodist congregations. Wright has degrees in organ performance and sacred music as well as choral conducting from East Carolina University and the University of North Carolina at Greensboro. He has dedicated his career to making outstanding music in church and community settings. “It’s very rewarding, especially when you witness the development of the singers,” he says.

For as long as he can remember, Wright has been a musician. “I started singing and taking piano lessons when I was 5,” he recalls. In high school, he played horn in the symphonic band, was a member of the North Carolina Boys Choir and took private lessons from Duke University Chapel organist Robert Parkins. Wright believes he inherited his love of music from his mother’s side of the family. “My mother was a pianist and amateur organist. And I’m told that my mother’s father was also a musician. My father is tone death,” Wright jokes.

Our students are in constant demand as singers, conductors and instrumentalists in churches and other music organizations. They perform and lead music in houses of worship as well as teach and perform for organizations of all kinds throughout the region, providing untold hours of music listening and music making opportunities for South Carolinians.

Tayloe Harding, dean of the School of Music

And as the artistic director of a community and professional choir in the Tar Heel State, he’s doing his part in maintaining North Carolina’s strong tradition of community singing. “Kernersville didn’t have a choir. With the help of several dedicated musicians, I formed the 40-voice Kerner Chorale four years ago,” Wright says. Most recently, he founded the Kerner Singers, a small professional vocal ensemble that performs a cappella and with period instruments.

After 15 years of serving in various congregations and teaching music in a variety of educational settings, Wright decided to pursue a doctorate at the School of Music, studying under Larry Wyatt, the director of choral studies at Carolina. “I chose to come here because of Dr. Wyatt. His reputation is known across the United States,” Wright says. “He’s highly knowledgeable with regard to repertoire and interpersonal relationships in choral directing. And, most importantly, his students are getting jobs.”

Coming to Carolina was also an opportunity for Wright to perform as a member of the highly acclaimed USC Concert Choir, directed by Wyatt. The choir, which has toured internationally on numerous occasions, is widely known for singing a wide-ranging repertoire and its exceptional musicality. “Choir is the highlight of my day. Singing is always good for the soul,” adds Wright.

He also teaches music theory and aural skills to undergraduate students as part of his graduate assistantship. “I deeply enjoy being in front of the classroom,” says Wright, who is the first in his family to complete college. “From Day One at East Carolina, my peers called me ‘Dr. JAW’ — short for Dr. Jason Allen Wright. I guess it is my destiny to earn a Ph.D.”

Taking classes, teaching, singing and conducting keep Wright busy. But he finds time to work with the children in the church’s child development, where he teaches simple songs and rudimentary music skills. “Its an important part of their early education,” says Wright. “I value my time with the children at Incarnation; it’s a fun part of my Wednesday.”

Chartered nearly 100 years ago, Incarnation has a long history of capable music directors and organist, and Wright continues that distinguished line. "Along with his experience and musical gifts, I'm excited that he brings a strong connection to the USC School of Music," says Pastor Anderson.