Rebooting an IT career 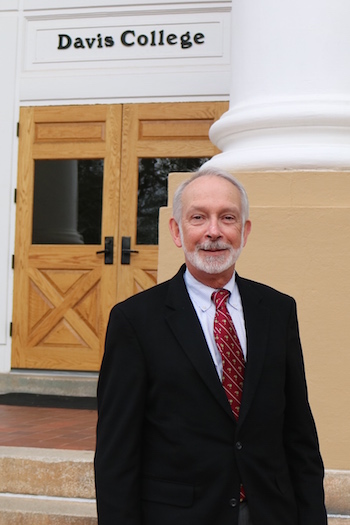 Former university CIO Bill Hogue is starting a new role as a faculty member in the School of Library and Information Science.

A window in Bill Hogue’s new office overlooks the past.

After more than 16 years as Carolina’s chief information officer and vice president for information technology, Hogue is starting a new gig as a faculty member in the School of Library and Information Science. He’s settling into his new role, unpacking boxes in close proximity to old memories.

“My first job was right next door in Petigru,” says Hogue, who worked at the then-library for the brand-new School of Medicine in 1976. “I was the third person hired in the School of Medicine library, to move boxes around and to catalog medical journals.”

Hogue’s journey in the intervening 40 years has spanned several states and a few sea changes. An information technology career that began in 1979 at Carolina as an evening shift computer operator took Hogue to MIT, Vanderbilt and Wisconsin before he returned in 2000 to Carolina, where he had earlier received bachelor’s and master’s degrees.

It was not the career path Hogue would have predicted after taking a basic programming class as an undergraduate.

“Frankly, it didn’t particularly draw me at the time,” he says. “I was an English major and thought that I might be a faculty member in English one day, teaching American Literature.”

Realizing that humanities jobs were scarce, Hogue entered the nascent field of information technology just as microcomputers came into vogue — the first of several fundamental technological shifts Hogue witnessed. At MIT, he was on the ground floor of networking growth as he worked on Project Athena, an information-sharing initiative, while getting his doctorate at Harvard. And he’s watched the mass mobile migration to hand-held devices.

“I’ve seen computing up close in five different decades,” he says. “It really has been an extraordinary revolution — multiple revolutions.”

Hogue has represented Carolina in regional and national technological forums including EDUCAUSE, a non-profit advocate for advancing higher education through information technology that recognized him with its first community leadership award in 2013. He’s also proud of having helped establish the university’s Center for Teaching Excellence in 2006 and of leading OneCarolina, the university’s multi-year project to modernize and streamline its academic and administrative services.

Hogue also points to his role in creating the school’s first research cyberinfrastructure team and to his contributions in the planning and implementation of Carolina’s partnership with IBM as career highlights, but says it was time for a new challenge.

“I’m not egotistical enough to imagine that the university couldn’t benefit from fresh eyes, fresh perspectives, fresh ears,” he says. “Rather than waiting too long, to the point where I felt that I was maybe not contributing what I should be contributing in that role, it seemed like a great opportunity to make a transition.”

Hogue’s new colleagues couldn’t be more pleased with the timing.

I’ve seen computing up close in five different decades. It really has been an extraordinary revolution — multiple revolutions.

“We are very happy bringing him on as a senior clinical professor,” says David Lankes, director of the School of Library and Information Science and a fellow professor. “The plan isn’t just to have this be: ‘Here’s an office and show up every so often.’ We’re anxious to sit down and talk about how we make our programs better, interact with students, interact with the faculty, and use some of his great experience and connections with industry to get our students experience as well.”

Hogue says his job in his first semester will be to listen, learn and contribute when he can. He’s looking forward to doing that at a pace more suited to digesting the information he’s been in charge of distributing for so long.

“Part of what I really am looking forward to is being a little bit more contemplative and a little less driven to meet deadlines, to be sure services are up and running,” he says. “I really do view it as a promotion. I have an opportunity now to be right at the heart of what the mission is at the university, which is to engage students and to be centered on what it is that they’re exploring, and to think broadly as well about our role in bringing information to the larger society.”