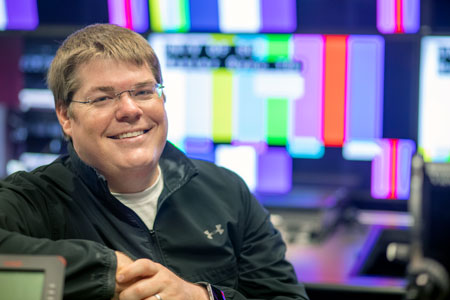 “Information science spoke to me — it was exactly what I wanted.” — Justin Stoll, MLIS student and assistant director for live productions for Gamecock Athletics

Two weeks into his job with the University of South Carolina athletics department, Justin Stoll crafted some of the most iconic words in Gamecock football history, words that now boom across more than 80,000 fans at the beginning of each home game: “It’s Saturday in South Carolina,” the voice echoes from the scoreboard. “Welcome to Williams-Brice.”

“That might be one of the great moments of my career,” Stoll says. “People know that word for word, and I wrote those words. It’s a really cool feeling to give them something that they care to memorize or care to love.”

Today, Stoll is nine years into the job. Not only does he play a large role in Gamecock Athletics’ productions, he’s also working with the department to expand their digital and analogue archives thanks to his other role — master of library and information science student.

Initially, he set out as a theater major at Ohio University, but that changed when he was bitten by the production bug.

“We did a high school football coverage show covering them like SportsCenter,” Stoll says. “It kind of encapsulated everything that I am doing in my career now.”

From shooting and editing film to building graphics or even reading the entire 600-page technical director’s manual, it was all a part of the process for the aspiring director.

“Every single day you set out to learn something new or try something new — it was very experimental,” Stoll said. “Throw the spaghetti on the wall and see what noodles stick.”

More than enough noodles stuck for NFL Films, which offered Stoll a position during his senior year. Stoll still holds the official title of ground cinematographer, spending the game collecting shots from the sidelines. It can be dangerous at times, as his story of his unfortunate sideline meeting with New York Giants safety Antrel Rolle details.

But those difficult sideline days led to the limelight as Stoll found himself on the sidelines of the Super Bowl in 2018 and 2019. “I was the guy who got the shot that said, ‘We’re going to Disney World’ with Tom Brady and Julian Edelman,” Stoll says.

He still spends many Sundays in the fall on the sideline at Bank of America Stadium in Charlotte, N.C., but most of Stoll’s time is spent working year-round in his office at Williams-Brice or on coursework for his degree.

“Information science spoke to me — it was exactly what I wanted,” Stoll says. “Everyone thinks about it in terms of libraries, but it’s so much more than that.”

Having a nationally ranked school in his backyard covering topics such as naming conventions, metadata tags and database management hit all the right buttons for someone who spent so much time inside a control room.

“Through my time in post-production, I developed a sincere love of workflow and metadata,” Stoll says. “If you don’t know where the asset is, you don’t have the asset. It is going to be a large need in the very near future, and I am hoping that I am seeing this picture ahead of the curve.”