The first words visitors see at the U.S. Air Force website are “We do the impossible every day.” As an airman, husband and father of two working toward his second master’s degree while on active duty, Tech. Sgt. Matthew Sigmon has learned that the slogan is true, and that the key word is “we.” 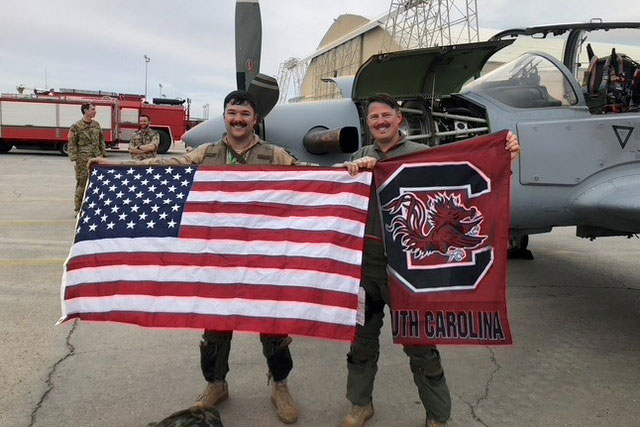 Tech Sgt. Matthew Sigmon, right, is pursuing a master's degree at UofSC while on active duty in the Air Force.

Sigmon is just a few classes away from earning a graduate degree from one of the world’s best programs for sport and entertainment management at the University of South Carolina. As if grad school weren’t hard enough, he also recently returned from a one-year combat zone deployment in Afghanistan.

“It is really difficult, but I’ve learned that you have to serve others around you in order to make things work,” Sigmon says. “If you do your part, you’ll find your community will be there to help you when you need it.”

Sigmon has, beyond a shadow of a doubt, served. He’s a 17-year Air Force veteran who has risen through the ranks and is now in charge of building bombs and supervising 45 airmen. He went into the explosives specialty because, as he puts it, “a long time ago they needed someone, so I did it.”

Throughout his military service, Sigmon has found ways to serve and to learn beyond his normal duties. He has helped coach high school football and wrestling while deployed in South Korea. He went to college and earned his bachelor’s degree in sports and health sciences and a master’s in education with an emphasis on sport management. He then completed the Air Force’s Senior NCO Professional Military Education Course before coming to South Carolina’s Master of Science in Sport and Entertainment Management program.

“I was looking for the best in the world, because I wanted the competition,” Sigmon says.

Getting to his higher education goal had challenges, but as always, he was willing to do the work. He accepted a yearlong tour in Korea so he could follow it by being stationed at Shaw Air Force Base in Sumter, South Carolina. His new station put him less than an hour from South Carolina’s Columbia campus and just minutes from UofSC Sumter, also part of the university system. He found his Air Force family and the university community ready to help him achieve his academic mission.

If you do your part, you’ll find your community will be there to help you when you need it.

“UofSC and the Air Force have both worked with me to make this happen,” Sigmon says.

Both Shaw and the sport and entertainment management department have found ways to provide flexibility for Sigmon to meet his military and school duties, including working with his military schedule and deployments overseas.

While the transition from airman to student and back again might be difficult for some, Sigmon’s philosophy makes it easy.

“The transition from student to whatever the hat worn is as simple as serving the next person who needs you,” he says. “Service is the most important aspect of life.”

As he finishes his latest degree, Sigmon is planning to retire from the Air Force and hopes to work in the sport management industry. Some of the best moments of his childhood were made around sporting events, and he wants to be part of making those great moments for new generations.

Sigmon says all the hard work has been worth it. To those who are where he was years ago, in high school or college and pondering the next step, he offers straightforward advice.

“First, find the job you want to have, no matter what it is. Talk to a person who has that job. Find out what it takes to get there, and then go out and do it.”