The university’s Social Justice Awards were created to recognize individuals who have exemplified the philosophies of the Rev. Martin Luther King Jr. through random or ongoing acts of community service, social justice or racial reconciliation.

Administered by the Office of Diversity, Equity and Inclusion, the awards this year went to an endowed chair and associate professor in the School of Information Science; an associate professor of higher education who directs the university’s Museum of Education; and a Gamecock football player who proclaimed “ ’Matter’ is the Minimum” during last summer’s Black Lives Matter protests.

The winners will be recognized by university President Bob Caslen during an awards presentation Thursday (Jan. 14) at the Hollings Library on campus.

Nicole Cooke says she first became interested in exploring social justice issues at the start of her career as a librarian. 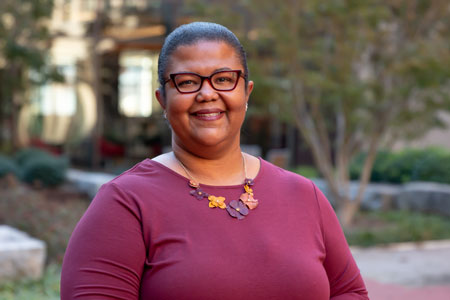 Nicole Cooke holds the Augusta Baker chair in the College of Information and Communications.

In a field where more than 85 percent of the professionals are white women, Cooke stood out. And that observation inspired her desire to help diversify the field of librarians to make the profession more equitable and better reflective of the communities librarians serve.

“Anyone who looks like me is different in the profession,” she says, adding that her early career service work was about trying to change that.

“From there, when I became a faculty member, it became a teaching and research subject for me. That might be where I backed into this work. I had students at the graduate level who had never seen a teacher in the front of the classroom who did not look like them. If I had a large or even a small class of students, and again this profession is predominantly comprised of white women, that would be who was in my classroom. So, for the most part, it was a great opportunity to share and get to know each other.”

But she did have a few students who pushed back, not comfortable with a Black woman leading the classes. She knew it would be “tantamount to malpractice” to send those students out to work in a diverse community without first educating them about diversity, equity, inclusion and social justice issues. She developed courses on those topics, digging into the issues that future librarians would need to understand to be informed professionals. That led to research on the topics through her lens as a librarian and scholar.

Two years ago, Cooke was chosen as the Augusta Baker Chair in Childhood Literacy in the School of Information Science. She had been invited to keynote the College of Information and Communications’ Diversity Research Symposium a year earlier while working as an associate professor at the University of Illinois at Urbana-Champaign, and had learned about the Baker chair. The position was named for the legendary children’s librarian and storyteller, and Cooke initially thought that she wouldn’t be the right fit for the role. But UofSC wanted the position to reflect Baker’s legacy as a pioneering librarian, focusing on her involvement in diversity, equity and inclusion issues.

It turned out to be a perfect fit, as Cooke quickly established herself as a leader on campus through her research and classes focusing on diversity and social justice. She says “cultural competence” has turned out to be the cornerstone of her career, as she works to celebrate the differences among people in a community.

“At the School of Information Science, we talk a lot about community literacy. That is how we get to know our communities; how we know enough about them to be able to go into these communities and create services and products and materials that will benefit them. So, it becomes a co-creation of services. We’re not going to go into the community and dictate and tell them, ‘This is what you need to do.’ But instead we feel like we’re a part of the community so how can we work together so everyone benefits. That’s really the lens through which we do the work.”

Cooke says she looks at her work as a “train-the-trainer model,” with her goal to develop a cadre of people who can go out and do social justice work and bring others along on the journey.

“Some of the work I do is to encourage people to do more than read the books (about anti-racism),” Cooke says. “All of that is fabulous, but I need people to do more than that. What are you going to do with the knowledge you receive from those books? We need to take the new information and turn it into action.

“Social justice is action; it is working to make things better for everyone, even when it’s not convenient for you.”

Associate professor and director of the Museum of Education

Toby Jenkins grew up in Columbia and earned her undergraduate degree from the University of South Carolina, before leaving her hometown for universities and experiences all around the globe. At every stop, she was an advocate for diversity in higher education, for forging inclusive communities and for making sure college students find a welcoming home on campuses. 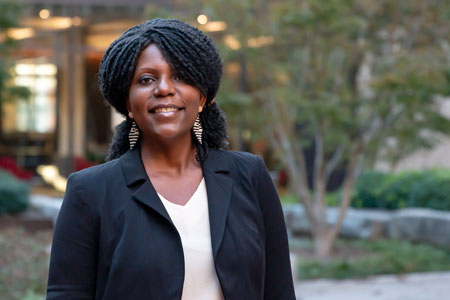 Toby Jenkins is an associate professor of higher education and director of the university's Museum of Education.

Jenkins is now back in her hometown and at her home institution, where she is an associate professor of higher education and director of the university’s Museum of Education. She is considered a national expert on cultural inclusion and the student experience in higher education, focusing particularly on the innovation and transformation of university cultural centers.

Her first experience with university cultural centers happened when she was working in student activities at the University of Maryland and became drawn to the school’s Nyumburu Cultural Center, the home for Black social, cultural and intellectual interaction on campus.

“I could still plan events and plan programs, but they were programs and experiences that raised people’s consciousness, helped students to learn more about themselves, that exposed them to learning history, to engaging with communities, to traveling the world and expanding their minds.”

She says she had been exposed to many of those issues and ideas in various phases of her life, including from her parents and grandparents, as she was growing up in South Carolina, and in her African American Studies classes at UofSC taught by civil rights icon Cleveland Sellers. At Maryland, she said she learned how to create dynamic, life-changing experiences out of the classroom that elevated people’s consciousness and helped launch her career in diversity and inclusion.

Jenkins has written five books focused on culture, family and higher education in contemporary society.  My Culture, My Color, My Self: Heritage, Resilience and Community in the Lives of Young Adults was named by the Association of American University Press to the list of “Top 100 Books for Understanding Race Relations in the U.S.” Family, Community, & Higher Education is an edited volume that explores the critical role of family and community in the lives of first-generation college students. The Open Mic Night: Campus Programs that Champion College Student Voice was awarded a special recognition as the 2018 “Outstanding Edited Collection in Curriculum Studies” at the American Education Research Association’s annual meeting.

“I always bring my cultural self into my work in hopes to inspire other students to not let go of who they are; to understand that part of yourself is brilliant and can really contribute to your success.”

She has impacted life on college campuses around the country, and she believes one of the biggest changes she has helped create is to help forge new traditions on predominantly white campuses, since long-running traditions don’t typically include experiences of people of color.

“The work that I’m doing here is to transform the campus and create spaces that can sustain and that can represent cultural communities, ethnically diverse communities,  in ways that make (students)  feel that they are a part of the university’s history and traditions and that they matter in important ways.”

It was a simple sign, held by a University of South Carolina football player during a peaceful protest march in the summer of 2020 following the killing of George Floyd by a Minneapolis police officer. 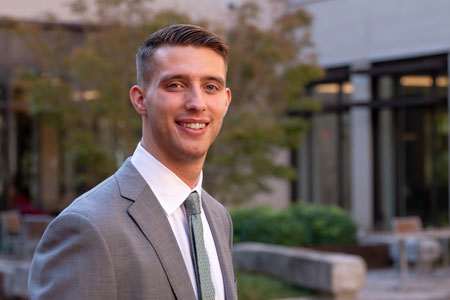 A photo of the sign and the student-athlete holding it, Jay Urich, quickly went viral on social media, where it was shared and shared again, including by Bernice King, the daughter of Martin Luther King Jr. It was a moment that united people across the state, including the rival football teams of South Carolina and Clemson. And it’s a moment Urich has built on since the summer, including starting a nonprofit to reach children in need.

For Ulrich, it was the three additional statements, declaring black lives worthy, needed and beloved, that hit home for him. “I wanted the world to see. I wanted truly my teammates to see, that was my vision.

Urich came to UofSC from Greenville on a football scholarship, and played quarterback, receiver and was on special teams. He said his social justice journey was inspired by his teammates, his friends and specifically Marcus Lattimore, the former Gamecock star running back whose career was sidelined by injury and who later served as the team’s director of player development.

The combination of Floyd’s death and the coronavirus pandemic during the summer of 2020 caused Urich to take time to fully explore his own beliefs. He said he understands the huge role sports plays in our society, and he believes athletes should use their voices to speak out about their passions and the things that matter to them.

“This down time has given me an opportunity to speak up and to use my platform for good," he says.

In July, he created Original Design, a nonprofit started to provide resources, opportunities and supportive relationships to help underserved children around the state. The organization plans to offer camps for 10- to 12-year-olds that focus on faith, public health and sports, with the goal to help children live healthy, honorable lives.

He worked with Lattimore, former Gamecock quarterback and now football staff member Connor Shaw, coaches and the university’s athletic department to put his dream into action.

Urich, who earned his degree in December from the Arnold School of Public Health and plans to pursue his master’s in educational psychology, says the organization will hold its first introduction camp in May, followed by back-to-school and holiday camps.