In 1961, a group that would come to be known as the “Friendship Nine” hoped to reinvigorate the sit-in movement with a “Jail, No Bail” strategy to push the costs of enforcing segregation onto the city, rather than onto civil rights supporters, who paid substantial bail fees every time students were arrested. Bobby Donaldson, history professor and director of the Center for Civil Rights History and Research, writes about the strategy and a 60-year-old letter by activist Thomas Gaither – arrested with the Friendship Nine during a sit-in in Rock Hill, South Carolina – deep in a records box in the South Caroliniana Library.

In a cramped cell in a South Carolina prison camp, 22-year-old African American activist Thomas Gaither wrote, “I am presently in deep contemplation as to just what our nation and our particular region of the nation prizes most.”

It was Thursday, Feb. 23, 1961, and Gaither was serving a 30-day term of hard labor on a road gang for what police called “trespassing,” when he and students from Friendship Junior College staged a sit-in at a Rock Hill, South Carolina, lunch counter. The letter he was writing marked day 23.

Gaither wrote on a folded sheet of paper, responding to Alice Spearman, a white civil rights advocate and executive director of the South Carolina Human Relations Council. Gaither told Spearman that he lauded “the concern you and many other Americans have shown for us as we have been imprisoned here, and moreover for the cause for which we suffer…

"Ugly, distasteful, and irrational attitudes as displayed here in S.C. and all over the confederate South are suppressing Justice and the glowing opportunity for America to become again the leader of the world,” he wrote.

For the nation, Gaither concluded, “our ultimate choice is desegregation or disintegration.”

For nearly 60 years, Gaither’s powerful words on yellowing paper lay deep in one records box in the South Caroliniana Library. The carefully written letter came to light as scholars at the University of South Carolina’s Center for Civil Rights History and Research, where one of us, Bobby J. Donaldson, is the director, reviewed material for an exhibit entitled “Justice for All,” that tells, through hundreds of documents like Gaither’s letter, the long history of South Carolina’s African American struggle for justice and civil rights.

Training of a movement architect 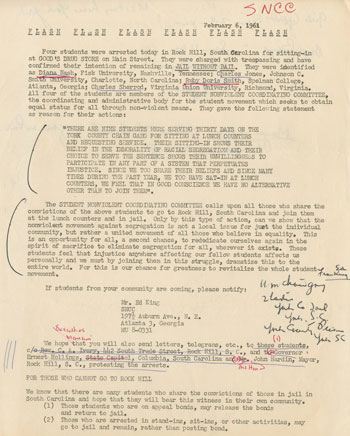 A draft press release by SNCC in which the Friendship Nine are said to be the inspiration for other students being arrested for a subsequent lunch counter sit-in. Wisconsin Historical Society

In 1960, students moved to the front lines of civil rights activism in the U.S. with an independent movement of lunch counter sit-ins and mass marches to protest segregation.

Inspired by the Feb. 1 sit-in of four college students in Greensboro, North Carolina, thousands of students in cities across the South staged sit-ins. One of the largest movements took place in the college town of Orangeburg, South Carolina, where Gaither was a senior at Claflin College and Charles McDew, the future chairman of the Student Nonviolent Coordinating Committee, or SNCC, was a student at South Carolina State College.

After organizing Orangeburg protests, Gaither was hired as a field secretary for the Congress of Racial Equality, an interracial alliance formed in Chicago in the 1940s that used nonviolent direct action to draw public attention to social injustice. He was assigned to Rock Hill, near his hometown of Great Falls, South Carolina.

After a fall of training, Gaither capped a month of student sit-ins with a special protest, leading the group of Friendship Junior College freshmen in the Rock Hill McCrory’s store sit-in on Jan. 31, 1961. Police and television news crews were waiting, and a manager immediately told the students: “We can’t serve you here.”

After just 15 seconds, police rushed in, shoved the students off the lunch counter stools, then roughly marched them to the nearby city jail.

Typical of courts in the Jim Crow South, Gaither and the students stood trial the next morning. They were summarily convicted. In an attempt to end sit-ins, the judge threatened the students with a sentence of hard labor or US$200 bail.

Instead, the students had planned to serve time in the prison farm in a “Jail, No Bail” strategy. Gaither learned the tactic at a fall 1960 CORE conference in Florida; then he trained Friendship Junior College students in it.

Now, the group that would come to be known as the “Friendship Nine” hoped to reinvigorate the sit-in movement and to push the costs of enforcing segregation onto the city, rather than onto civil rights supporters, who paid substantial bail fees every time students were arrested.

The Pittsburgh Courier, a leading African American newspaper that circulated widely in South Carolina and the South, ran an article headlined, “Jail … No Bail Is ‘Sit-ins’ New Approach.” It was obvious, South Carolina journalist John McCray wrote, “that the idea of putting school kids on the chain gang ‘shook up’ just about everybody.”

Inside the prison, armed guards forced the prisoners to work at hard manual jobs.

Outside, word spread of their “Jail, No Bail” campaign. Within a week, Charles Sherrod, J. Charles Jones, Diane Nash and Ruby Doris Smith of the Student Nonviolent Coordinating Committee traveled from an Atlanta meeting to stage a sit-in in the same Rock Hill lunch counter in protest of the Friendship Nine’s treatment – and also went to jail.

New York Times reporter Claude Sitton traveled to Rock Hill to write about Gaither and his sit-in companions in a story headlined, “Students Declare They Will Not Post Bail or Pay Fine – New Campaign Seen.” In the article, SNCC leaders urged other students from the region to “join them at the lunch counters and in jail.” 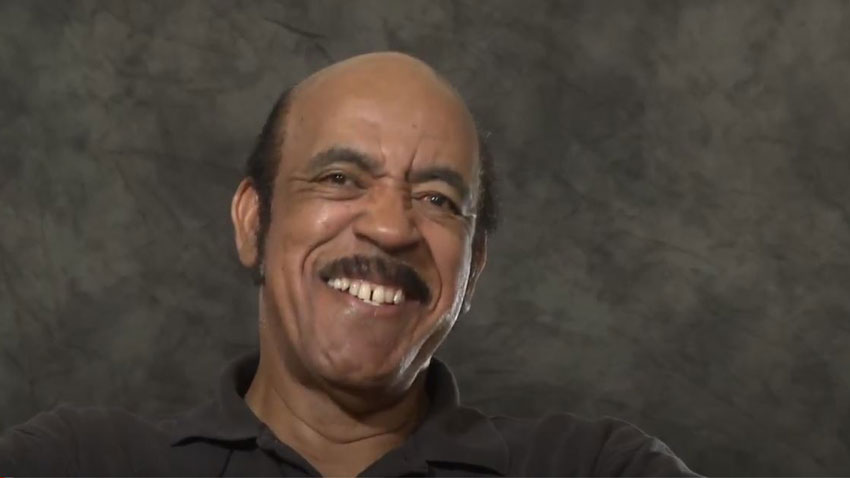 As public demonstrations of support for the students grew, the warden increased his pressure on them, forcing them to work double that of the other hard labor prisoners. When one of them, John Gaines, objected to their treatment, the warden removed him from the group and put the rest of the men back in solitary confinement.

“Aware of what might happen to a lone Negro ‘agitator’ in the hands of white southern prison guards,” Gaither wrote later, “we feared for Gaines’ safety.”

The students launched a hunger strike until they learned where and how Gaines was. On the third day, alarmed prison officers told the students that Gaines had been transferred to the city jail. The Friendship Nine ended their hunger strike. The warden returned them to regular confinement and ended the injurious double work.

In writing his letter days later, Gaither emphasized that the students staging sit-ins at lunch counters “are not striving to make headlines in the newspaper or to put any store out of business, but to save a lost nation.” In Atlanta, 85 students adopted the “Jail, No Bail” strategy following a sit-in arrest and conviction, and their action led directly to an agreement to desegregate the city’s lunch counters.

After his release, Gaither received a new assignment from CORE’s directors. In April 1961, he rode a bus south from Washington, D.C. to New Orleans, scouting the route for CORE’s Freedom Rides, which tested enforcement of the 1960 U.S. Supreme Court ruling that ordered desegregation of waiting rooms, lunch counters and restrooms used for interstate buses and trains.

Gaither mapped bus station entrances and exits, preparing for the historic challenge later that month. He routed the group through Sumter, where he had done CORE work, and Rock Hill, where riders including future Congressman John Lewis encountered their first violent attack.

On the contrary, Thomas Gaither’s neatly folded letter permits us to revisit and revise a pivotal chapter in the history of the Civil Rights Movement. As Gaither supporter Lillian Smith wrote at the time, “It is something that should not have happened in our country and yet it did happen. Why? You and I must answer that.”