American (Jewish) Humor in an Era of Ethnic Sensitivity and Cultural Competence:
Intersections of Religion, Race, Ethnicity, and Gender in American Humor

Conference Location: Click here for the schedule and locations of talks and film screenings: Conference Program

Contact Stan Dubinsky for more information about the conference

This Spring 2018 conference at the University of South Carolina will explore current perspectives on American (Jewish) Humor in the contexts of (i) American and European traditions, (ii) racial, ethnic, religious, and gender-based humor in general, and (iii) the current social and political climate that questions the purposes and legitimacy of such humor. Situating Jewish, racial, ethnic, religious, and gender humor in a present-day milieu of heightened ethnic sensitivities, it will explore the boundaries between identity and offense. The conference will include invited presentations (variously) on Jewish, African-American, ethnic, gender, and religious humor by internationally established scholars of American humor, along with discussant and panel contributions by local and regional scholars. Presentations will compare and contrast different categories of humor, as well as explore the tensions between sincere characterization and offensive caricature in the realm of humor discourse. It will also include a screening of the film "The Last Laugh" (a documentary on Holocaust humor, featuring survivors, writers and comedians) and a lecture by the filmmaker, Ferne Pearlstein.

"The most remarkable thing about my mother is that for thirty years she served the family nothing but leftovers. The original meal has never been found."    -Calvin Trillin

Topics and questions to be addressed by the conference presentations:

• Civil discourse. How do we talk to each other in a civil manner using humor as a vehicle?
• Understanding the message. How does humor serve to articulate values, attitudes, opinions and concerns?
• Calculating limits. What are the limits of ethnic, racial, and religious humor? When does humor become offense, and what category of offense does humor represent?
• Determining entitlements. Who is entitled to use humor of a particular type? In what contexts? Who is entitled to hear such humor?
• Adjusting for the medium. What are the differences between print and oral delivery? Between the printed word and the illustration?
Conference videography provided by … 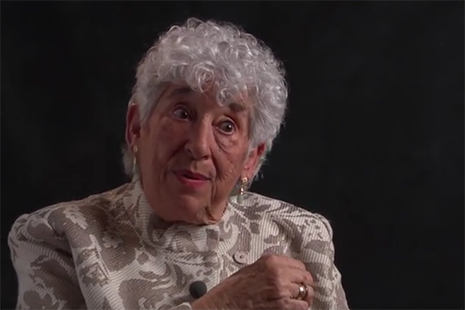