Every Rhodos Fellow has access to the Rhodos Makerspace — a digital workshop where residents collaborate and launch world-changing projects.

The Secret Lab Down the Hall

Have an idea at an unusual time? Send a design to one of the 3D printers, then go down the hall to check on it (you don't even need to put shoes on). Whether you're using laser cutters or sewing machines, soldering irons or hot glue — even if you just need a group meeting space to share designs on a big screen — this is the magic garage where big things begin.

We Meet You Where You Are

Some students have never written a line of code or touched a resistor. Others play with Raspberry Pis and virtual reality regularly. In Rhodos, there's space for people to get comfortable with brand new technology, and to grow their expertise if they're already familiar. We all learn from each other, support each other when we're starting out and challenge each other to go farther. 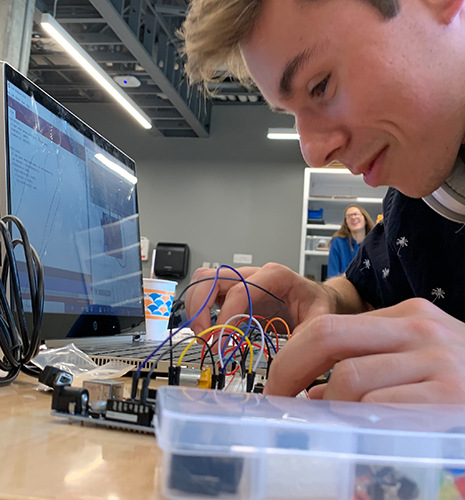 Rhodos Fellows are always making something unexpected. One week they're hacking discarded toys with foliage to make robots that explore issues of sustainability, another week they're building racecar automatons that squawk at each other in Morse code.