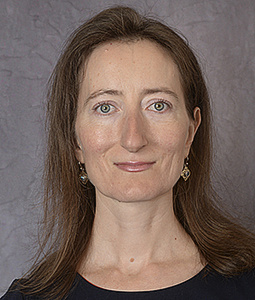 Although ninety-eight percent of the mass of ordinary matter is due to the strong subatomic force,
the present theory of that force (Quantum Chromodynamics) is still not fully understood.  Almost
the entire mass of an atom is concentrated in its tiny nucleus, which is made of nucleons that are
either positively charged (protons) or electrically neutral (neutrons).  These subatomic particles,
however, are not elementary but are themselves composite objects made of quarks held together
by glue particles (gluons).  The structure of nucleons is a manifestation of the strong force, which
is indeed the strongest force known.  The core of Prof. Ilieva’s research is the study of the strong
force by probing the substructure of matter.  Her research activities help to address overarching
questions about the origin of most of the visible mass in the universe, the nature of neutron stars,
and the gluonic structure of nucleons and light nuclei.  Answering these and related questions is a
complex task requiring dedicated experimental observations and careful testing of theoretical
predictions against measured observations.  Professor Ilieva’s research also promotes teaching,
training, and learning.  The preparation of junior scientists plays a central role in her program.
The nuclear physics research program of Professor Ilieva is primarily based at the Thomas Jefferson
National Accelerator Facility (JLab) in Newport News, where she uses high-energy electron and
photon beams along with sophisticated particle detectors as powerful microscopes to study the
structure and interaction of baryons.  Her program provides crucial high-precision, polarized and
unpolarized photo-production observables that will help pin down present problems in strong
QCD.  For example, complete and mostly complete meson-photoproduction measurements will
settle in an almost model-independent way lingering problems in baryon spectroscopy and in
particular verify the SU(6)xO(3) three quark baryon structure.  The structure of baryons can be
also probed through their interactions in scattering processes.  The study of strong interactions
involving the strange and the charm quarks is essential to understand the properties of neutron
stars and the gluonic structure of bound nucleons and light nuclei, respectively.  Professor Ilieva
carries a comprehensive study of hyperon photo-production off deuterons.  The extensive set of
single- and double-polarization observables will provide long-needed experimental information
on the hyperon-nucleon interaction.  At the recently upgraded 12-GeV JLab, she carries out a
program on J/psi photoproduction off deuteron.  This research will provide the very first crosssection
estimates at energies close to threshold.  Another aspect of her research is to support the
detector development for a future Electron-Ion Collider in the U.S.  She carries out an assessment
of the performance of commercially available small photosensors in high magnetic fields in her
test facility at Jefferson Lab.