The Department of Religious Studies was awarded departmental status in 1949 when Dr. Lauren Brubaker, the University chaplain, inaugurated one of the first programs in the country for the academic study of religion. For the first ten years, Brubaker was the sole faculty member. The undergraduate major was established in 1968 with the addition of Dr. Donald Jones to teach Biblical courses.

The Department extended its offerings with the hire of Dr. Harold French in 1972 to teach Asian religions. Over the years, he added the psychology of religion, new religions in America and other courses that widened the Department’s academic range. In 1974, Dr. Carl Evans joined the faculty to offer courses in Old Testament and early Israelite history, and, in that same year, Dr. Kevin Lewis arrived to teach in the area of religion and culture. In 1980, Dr. James Cutsinger was hired to teach Christian theology, ethics and comparative religious thought.

In recent years, the Department has hired faculty with expertise in Islam, Judaism, Buddhism, Hinduism and religions of the African diaspora. Current faculty research and teaching interests include, in addition to the traditions just mentioned, the psychology of religion, religion and literature, religion and ecology, women’s and gender studies, medieval historiography, theory and method in the study of religion, religion and the arts, meditation and transformative practices, and the philosophical expressions of the world’s religions.

The three earliest architects of the Department, Lauren Brubaker, Donald Jones, and Harold French, passed away between 2010 and 2014. The Department remembers their contributions and their individual, inimitable persons.

Rev. Doctor Lauren E. Brubaker, known affectionately by friends and colleagues simply as Bru, was a well known and loved presence around the Columbia community and on the campus of the University of South Carolina from the early 1940s until his passing.

A Presbyterian minister with a Th.D. from Union Theological Seminary in New York City, he came to the University of South Carolina in 1948. He held the title of University Chaplain, headed the work of the campus chaplain and taught courses in theology and the Bible.

Dr. Brubaker inaugurated one of the first programs in the country for the critical academic study of religion in 1949, when the Department of Bible and Religion was awarded departmental status. There had been no significant change in methods of studying religion throughout the 19th and early 20th centuries. Brubaker brought the critical study of the Bible and Christian theology to the University of South Carolina.

Under Brubaker, the study of religion at USC began as courses in Old and New Testaments and a branch of Christian theology known as apologetics. But recognizing that a department with “Bible” in its name was defined too narrowly, he subsequently had the Department’s name changed to the Department of Religion. Later, reflecting evolving conceptions of the academic discipline in institutions of higher learning, the name was changed to Religious Studies. That conceptual change prepared the way for the hiring of Hal W. French in 1972 to teach Comparative Religion with a focus on South and East Asian religions.  Kevin Lewis was hired in 1973 to teach courses in Religion and Culture.

Brubaker’s work in the classroom was informed by historical-critical methods of inquiry and methods of theological reflection that took culture seriously. In addition to Bible and Christian Theology courses, a course in Art, Theology, and Politics became a mainstay of the curriculum.

While his discipline was theology, he taught in many different subject areas, especially when he was the sole member of the Department. He established the focus of the department of religious studies as an interdisciplinary enterprise using, as appropriate, historical, comparative, philosophical, and cultural analyses of religious phenomena, hiring four more faculty in his 30-plus year tenure. He held national stature as a President of the American Academy of Religion in the 1960s.

For the first ten years, Dr. Brubaker was the sole faculty member teaching all courses. The undergraduate major was established in 1968 with the addition of Dr. Don Jones to teach biblical courses. The faculty gradually increased over the decades to include professors in Asian studies, cultural studies, Islamic and Jewish studies. Brubaker retired in 1980, but continued to teach on a part-time basis for the department and maintained a close relationship with the faculty and students until he moved out of the area in 1990. He continued to return to visit with colleagues, connect with friends and interact with students at USC until his passing in 2010.

The Memorial Service for Hal French was held Tuesday, October 7, 2014 at Rutledge Chapel on the Historic Horseshoe of the University of South Carolina, where he taught from 1972 until his passing in the summer of 2014. Alumni, faculty colleagues and friends from the Department of Religious Studies, the South Carolina Honors College and Preston Residence College came together to remember a beloved teacher, friend and mentor.

Many stories, memories and tributes were shared. Former students joined retired faculty and family to remember the man everyone knew simply as Hal.

Around the University of South Carolina Campus, you usually didn’t even need to add his last name for people to know just exactly who you meant. He joined the Department of Religious Studies to cover the area of Asian religions, and later served as Chair of the department until he retired in 1995. Although retired, he continued to teach in both the graduate and undergraduate programs, direct theses for both graduate and undergraduate students, and participate in all the activities and events of the department. He chaired the committee for the Joseph Cardinal Bernardin Lectures in Moral, Ethical and Religious Studies until, at age 80, he requested the duties be passed on to someone else.

He continued to teach the department’s courses in Asian studies as well as the Psychology of Religion, Gandhi, King and non-violence, Herman Hesse and any number of popular courses over the years. Until the end, he could fill classes of 60 to 70. Teaching for both Religious Studies and the South Carolina Honors College, he took groups of students on international travel courses to China, Japan, Turkey, Greece and elsewhere.

Hal gratefully handed over his teaching duties in the area of Asian religions when we were able to hire three new faculty in Buddhism, Hindusim and South Asian Studies in 2013-14. But he continued teaching for the Honors College and taking students abroad for stimulating cross-cultural learning experiences. His last class trip was in the spring of 2014.

In 2014, Hal had decided to retire finally from all his university activities. His last class was scheduled with the Honors College for Fall 2014 and he would vacate his offices in Preston College at the end of Spring 2015. But he had a long list of plans for what he would be doing next. He said there was a substantial book list to begin enjoying and many volunteer organizations and activities, as well as his continued participation in interfaith organizations and activities, though no longer in an administrative role. He passed away unexpectedly July 10, 2014.

He touched lives with his wit, humor and quiet wisdom. His academic style was neither somber nor pompous but jubilant, exuberant and celebratory of life, humanity and spirit. He will be greatly missed by many.

Dr. Don Jones, professor of New Testament Studies in the Department of Religious Studies for over 45 years, passed away on Christmas eve 2012. Born in Xenia, Ohio, he graduated from Ohio Wesleyan University with an A.B. in English and the Methodist Theological School in Ohio with a M.Div. in New Testament.

In 1966, he received his Ph.D. in New Testament from Duke University and joined  the department in 1967 to teach Biblical courses using historical-critical methods of inquiry. Dr. Jones worked mainly in the areas of Luke-Acts, New Testament Christology and the Roman Imperial Cult (Emperor Worship) and its relationship to the spread of early Christianity. At the time of his passing, he had two major projects underway: one on Luke as the first Christian historian-theologian, the other on Christianity and the Imperial Cult in Roman Ephesus. A future work is planned on Christianity and the Roman Empire.

Donald Jones’s historical-critical approach to a variety of Biblical courses attracted such large numbers of students that Carl D. Evans was hired in 1974 to teach courses in Old Testament, making it possible for Jones to concentrate on the New Testament. Jones continued to attract eager students, both graduate and undergraduate, to his classes right up until the last years of his life.

He initiated the Nadine Beacham and Charlton F. Hall Sr. Visiting Lectureship in New Testament and Early Christianity along with the generous benefactor of the lectureship, Charlton Hall Jr. Dr. Jones was chair of the lectureship from its inception in 1995 bringing outstanding scholars in the field to speak on the University campus each spring. Seeking out the speakers with both established and promising careers, he built the lecture series into a nationally recognized venue for distinguished scholarship.

Dr. Jones served on the Classical Studies Committee, as adjunct faculty member in the Classics Program and on numerous University and College committees during his tenure. He was co-founder of the South Carolina Academy of Religion and served as its President.

A  longtime member of Trenholm Road United Methodist Church, Don became well known and well loved as he taught adult Sunday School classes at many Columbia area churches over the years. He served on the Board of Directors of the United Way Family Service Center, the Board of Directors of the Columbia Kiwanis Club, and the Richland County Volunteer Guardian Ad Litem Project, among a number of other community service activities. 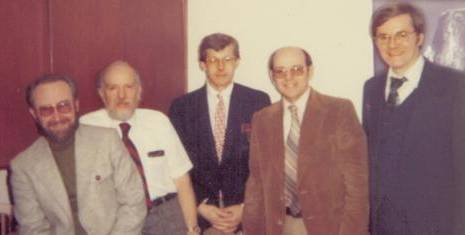