The University of South Carolina is honored to count two newly minted Governor’s Awards for Excellence in Science recipients among our faculty. On Wednesday, May 1, 2019, Governor Henry McMaster presented awards to Dr. Timothy Mousseau, a professor in the Department of Biological Sciences, and Dr. Hui Wang, an associate professor in the Department of Chemistry and Biochemistry.

“I am so pleased that it has become almost an annual tradition, to visit the South Carolina Statehouse and see our outstanding UofSC faculty receive Governor’s Awards,” said Vice President for Research, Dr. Prakash Nagarkatti. “Dr. Mousseau and Dr. Wang are very deserving of these honors. They join a distinguished and growing group of Governor’s awardees at the University of South Carolina.”

Dr. Timothy Mousseau has for years shared his work on the consequences of exposure to radiation from nuclear accidents like Chernobyl and Fukushima through a wide variety of traditional academic publications and other platforms, bringing awareness to an important global issue. He has published 11 books, more than 200 peer-reviewed scientific papers and been featured in several mainstream documentary films, spreading scientific awareness far and wide. The 2019 Governor’s Award for Scientific Awareness honors Dr. Mousseau’s long-term efforts to spread the word on radiation’s effects on plant and animal life. Read more about Dr. Mousseau’s research.

Dr. Hui Wang is a leader in nanotechnology research, studying the interface between tiny nanomaterials and even tinier molecules. His training as a doctoral student working with plasmonic nanoparticles, and as a postdoctoral scholar focusing on single-molecule spectroscopy, prepared him well for this unique line of inquiry. Potential applications for his work include early detection of cancer with a specially designed electrochemical nanoprobe, which can differentiate between normal cells and cancer cells based on biomarkers expressed on the cellular surface. The probe is so sensitive that it can detect as few as four or five cells. Read more about Dr. Wang’s research. 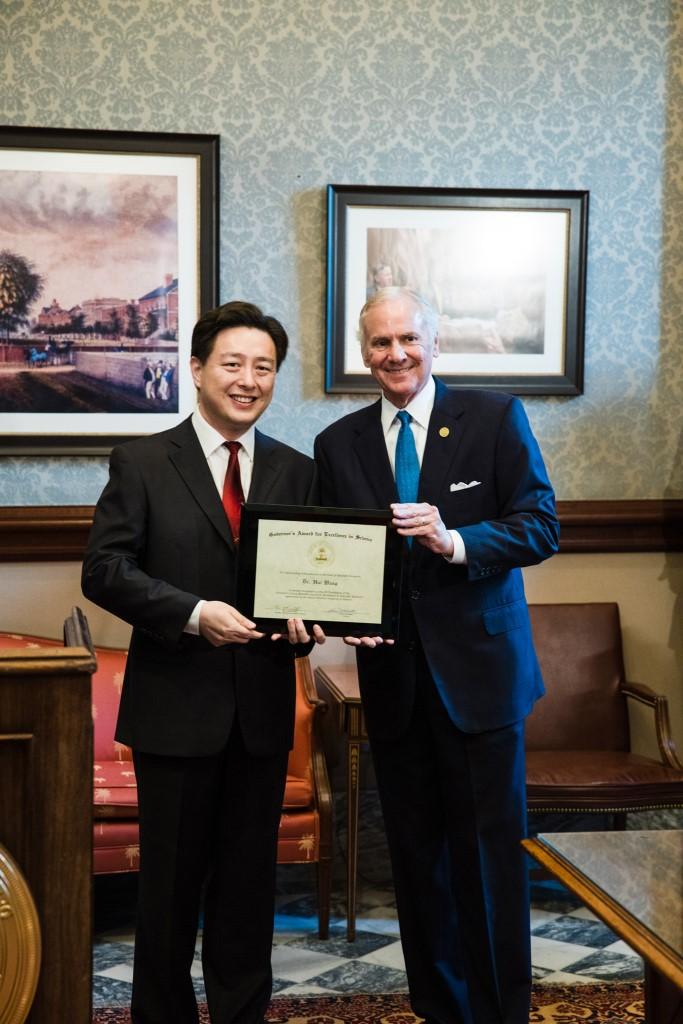 On Tuesday, May 1, 2019, UofSC faculty members Dr. Timothy Mousseau and Dr. Hui Wang were honored with 2019 Governor’s Awards for Excellence in Science at the South Carolina Statehouse.