The University of South Carolina has ranked among the top 100 worldwide universities granted U.S. utility patents since 2012, according to an annual list published by the National Academy of Inventors and the Intellectual Property Owners Association.

In the recently published 2020 listing (pdf), UofSC ranks in the 63rd position with 45 patents granted in 2020. This places Carolina above Ivy League Dartmouth University and many other prestigious American and international institutions, including Carnegie-Mellon and several Southeastern Conference universities. The NAI has included UofSC in its rankings for the ninth consecutive year, placing it more than 25 slots above our 2019 ranking in the 90th position. The listing was compiled using data from the U.S. Patent and Trademark Office.

UofSC Vice President for Research Prakash Nagarkatti praised the achievement saying, “It is a credit to our outstanding faculty that their innovation and hard work have kept our university on the NAI top 100 list since it began nine years ago. I am so proud to serve alongside these excellent scholars and inventors.”

Office of Innovation, Partnership and Economic Engagement Executive Director Bill Kirkland echoed Nagarkatti’s sentiments, saying “It is no secret that the University of South Carolina boasts a faculty with amazing research and innovation skills. These outstanding scholars, along with the top leadership at the University of South Carolina who support them through the the Office of Technology Commercialization and others, make it possible for our university to shine on the NAI top 100 list consistently each year. The fact that they have landed Carolina at position 63—higher than ever before—is a testament to their dedication and commitment.” 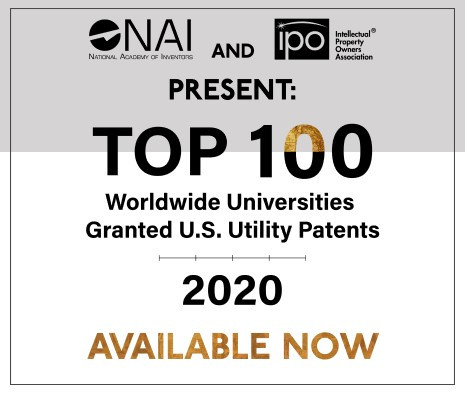 Download the 2020 annual report published by the National Academy of Inventors and the Intellectual Property Owners Association on top university patent holders. The Top 100 highlights the vital role patents play in translating university research and innovation.

Get the report (pdf)