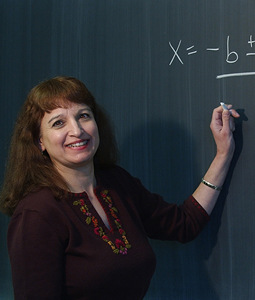 Liz has a Master of Science Degree in Mathematics from UMass Lowell and a Bachelor of Arts Degree in French and Secondary Education with a minor in Greek and Latin from UMass Lowell.  She has also taken several computer science courses.

Liz first came to USC Sumter in 1991. She teaches a variety of math courses – Calculus I, Calculus 2, Calculus 3, Calculus for Business Administration and Social Sciences, Finite Math, College Algebra and Basic Concepts Elementary Math I and II. Liz also worked as a Math Specialist in the Opportunity Scholars Program at USC Sumter from 2001 until 2014.

Liz is married to Dr. Robert Costello, Professor of Chemistry at USC Sumter.