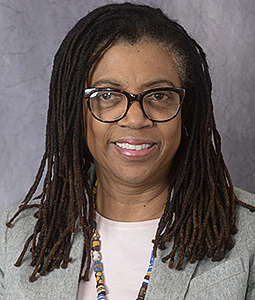 Religion and religious ethics are lenses that provide more complete focus on the world, our nation, our region.  It follows that religion is a discipline that crosses multiple disciplines.

In my own work, I utilize anthropology, history, cultural studies, and women’s studies. I aim to understand our contemporary lives and to engage my students in these discussions. I have a joint appointment with the Women & Gender Program.

Race, Religion and Politics: Towards Human Rights in the US. (Lexington Books, expected 2018)

Name It and Claim It?  Prosperity Preaching and the Black Church (Cleveland: Pilgrim Press, 2007)

Contributor to Oxford University Press encyclopedia on religion with work on “Gender and Public Religion.”

“The Gift of Black Women’s Embodied Spirituality” in Women Religion and the Gift, An Abundance of Riches, Edited by Morny Joy, (New York: Springer Press, 2016)

“A Reflection on Guns and Golden Calves (or, on constructing a god),” in Crosscurrents, Winter 2015

“The Politics of Public Piety,” in Crosscurrents, November 2014

Keynote, The Embodied Power of Sankofa, University of Pittsburgh conference “Diverse Spiritualities: Embodiment and Relationality in Religions of Africa and its Diasporas,” April 20 2017

Invited participant, Council on Foreign Relations Religion and Foreign Policy Workshop, May 2016 and May 2015.