The committee based its decision on Gehlert's leadership, advocacy and commitment to public health social work. As her nominee stated, "Dr. Gehlert focuses on social environmental influences on health, especially the health of vulnerable populations, which is a major concern of our PHSW section of APHA."

This award is named for two leaders in the field, Virginia Insley and Juanita Evans, who both played significant roles in the founding of public health social work education, research and services. Insley was the first chief social work officer for the Maternal and Child Health Bureau. She served from 1955 to 1980 and was succeeded by Evans, who held the position from 1980 to 2000.

Founded in 1872, the APHA consists of more than 25,000 public health professionals committed to building a healthier nation in one generation through science-based advocacy and programs. The APHA's mission is to improve the health of the public and achieve equity in health status, while working to advance the health of all people and communities. 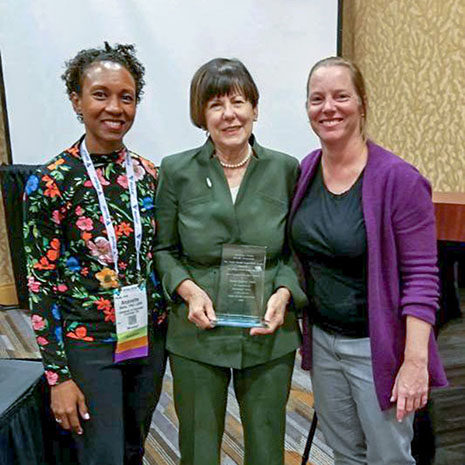 Dean Sarah Gehlert is joined by two members of the PHSW Awards Committee at the APHA annual meeting in San Diego.