John von Lehe, Jr. cited the famous Will Rogers quote to describe his mother, Agenora Adams von Lehe. “She never met a person she didn’t like.” He fondly remembered his mother Thursday as the von Lehe benches in front of the Hamilton College entrance were formally dedicated.

von Lehe, chairman of the University of South Carolina Board of Trustees and a partner of the law firm Nelson Mullins Riley & Scarborough in Charleston, donated the benches to honor the service of his mother, who was director of public welfare for the Department of Social Services in Dorchester County (S.C.) for more than 30 years.

“My mother taught me to teach all people with dignity and fairness, regardless of race, color, creed or religion,” said von Lehe. “Growing up, I traveled with her for her job when it was feasible because she was a working mother. We traveled around the county while she visited with recipients of social welfare services. I saw people in real life and realized her job was more than handing out money.”

von Lehe’s idea for the benches occurred after he noticed there was no place to sit in front of Hamilton College, besides a small brick wall. He considered one long serpentine bench before deciding two benches would be better.

“When he (von Lehe) created this space in memory of his mother, he also contributed to creating a sense of community at the college,” said Assistant Professor Breanne Grace. “This beautiful building provides us with spaces for learning and work, but the benches have created a space for rest, friendship, and bridging the inside of the college with the broader university and community.”

The dedication ceremony also included the presentation of the first recipient of the Agenora Adams von Lehe Endowed Fellowship to Bachelor of Social Work student Bridget Baggerly. The fellowship is awarded to an undergraduate student for leadership in the areas of child welfare and well-being, and school social work.

“I am very honored to be the first recipient of the fellowship,” said Baggerly. “With this aid, I have been able to focus on my academics, which has resulted in less stress and less worry about my tuition.”

Baggerly, who will graduate this May, is currently completing her field placement with Richland School District Two at Westwood High School in Blythewood, S.C. She will pursue her Master of Social Work degree through the college’s 11-month Advanced Standing program beginning this summer and intern at Epworth Children’s Home in Columbia. 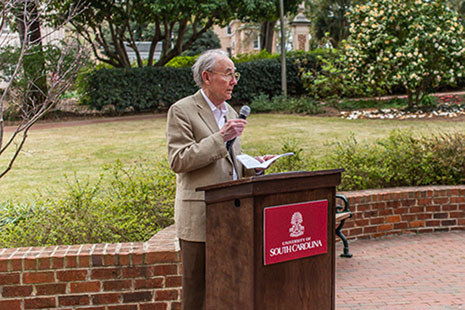 Watch the complete dedication ceremony for the von Lehe benches.